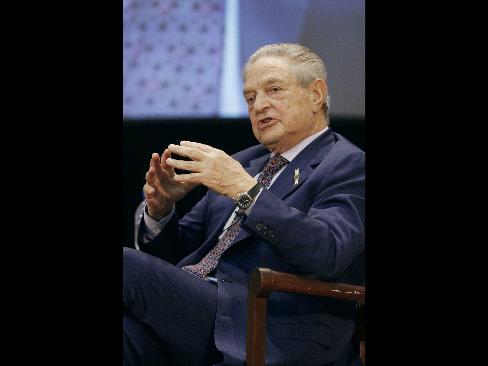 George Soros, chairman and founder of Soros Fund Management LLC, speaks at an open discussion at the University of Hong Kong in Hong Kong, on Feb. 3, 2010. (Bloomberg)

The $25 billion New York-based firm became the fourth- largest holder in the SPDR Gold Trust, adding 3.728 million shares valued at $421 million, according to a filing with the U.S. Securities and Exchange Commission yesterday. Its investment was worth about $663 million, the fund’s largest single investment, as of Dec. 31.

Soros joined China Investment Corp. and central banks including those in China and India in acquiring gold. China Investment, the $300 billion sovereign wealth fund based in Beijing, took a 1.45 million-share stake in the SPDR Gold Trust worth $155.6 million, according to a SEC 13F filing posted on Feb. 5.

“The dollar is weak and people are just shifting their money into a safer haven,” Tetsuya Yoshii, vice president for derivative products at Mizuho Corporate Bank Ltd., said from Tokyo today. “Central banks are adding gold to their reserves and we’re going to see more people adding gold to their investment portfolio as they shift into safer stuff.”

India bought 200 metric tons from the International Monetary Fund in October, while China’s holdings have expanded 76 percent to 1,054 tons since 2003, it said in April.

SEC filings are done quarterly, with a 45-day lag, so Soros could have sold some or all of the position since then. Soros, speaking last month at the World Economic Forum in Davos, called gold the “ultimate asset bubble” and said the price could tumble, according to a report in the U.K.’s Daily Telegraph newspaper.
(Maybe for a short period gold will fall if the dollar strengthens, but then gold will explode, when the dollar and other fiat currencies collapse and people finally realize that gold (and silver) truly are the only money of the elite.)

Money managers who oversee more than $100 million in equities must file a Form 13F listing their U.S.-traded stocks, options and convertible bonds. The filings don’t show non-U.S. securities or how much cash the firms hold.

Michael Vachon, a spokesman for Soros, declined to comment on Soros’s investments.

Assets held by the SPDR Gold Trust have expanded 2.2 percent this year after surging 24 percent in 2009. They stood at 1,109.42 metric tons yesterday.

Institutional investor Paulson & Co. held the largest number of shares in the fund as of Dec. 31, with 8.65 percent, or 31.5 million shares.

To contact the reporters on this story: Katherine Burton in New York at kburton@bloomberg.net; Glenys Sim in Singapore at gsim4@bloomberg.net