Electric Cars: Put A Battery In Your Roof 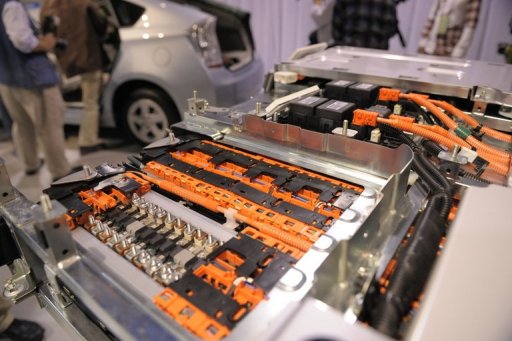 PARIS — A nanoscale material developed in Britain could one day yield wafer-thin cellphones and light-weight, long-range electric cars powered by the roof, boot and doors, researchers have reported.

For now, the new technology — a patented mix of carbon fibre and polymer resin that can charge and release electricity just like a regular battery — has not gone beyond a successful laboratory experiment.

But if scaled-up, it could hold several advantages over existing energy sources for hybrid and electric cars, according to the scientists at Imperial College London who developed it.

Lithium-ion batteries used in the current generation of plug-in vehicles are not only heavy, which adds to energy consumption, but also depend on dwindling supplies of the metal lithium, whose prices have risen steadily.

The new material — while expensive to make — is entirely synthetic, which means production would not be limited by availability of natural resources.

Another plus: conventional batteries need chemical reactions to generate juice, a process which causes them to degrade over time and gradually lose the capacity to hold a charge.

The carbon-polymer composite does not depend on chemistry, which not only means a longer life but a quicker charge as well.

Because the material is composed of elements measured in billionths of a metre, “you don’t compromise the mechanical properties of the fibers,” explained Emile Greenhalgh, an engineer at Imperial College and one of the inventors.

As hard a steel, it could in theory double as the body of the vehicle, cutting the weight by up to a third.

The Tesla Roadster, a luxury electric car made in the United States, for example, weighs about 1,200 kilos (2,650 pounds), more than a third of which is accounted for by batteries, which turn the scales at a hefty 450 kilos (990 pounds). The vehicle has a range of about 300 kilometers (185 miles) before a recharge is needed.

“With our material, we would ultimately lose that 450 kilos (990 pounds),” Greenhalgh said in an interview. “That car would be faster and travel further.”

Vehicles with bodies crafted from the new material would likewise shed weight because it is four time lighter than steel, while remaining as strong and stiff.

“It is the sort of thing you find in tennis rackets or fishing rods — a carbon fibre composite,” Greenhalgh said.

“We aim to increase the surface area of the fibres as much as possible without degrading the mechanical properties. The larger the surface, the more electrical charge they can store.”

The European Union (EU) announced last week that it would sink 3.4 million euros (4.6 million dollars) over three years into developing the new technology, with Imperial College coordinating a project spread over nine companies and institutes in Britain, Sweden, Germany and Greece.

Swedish car manufacturer Volvo has said it might build a demonstration panel into an existing electric car prototype.

Within three years, the researchers expect shave 15 percent off the weight of a car, and in five to six years, be able to integrate the material into the body.

But it will take a decade before the new material could fully replace existing batteries, Greenhalgh cautioned.

One of the question marks is cost.

Carbon fibre is a lot more expensive than steel, but mass production should bring down costs dramatically, he said.