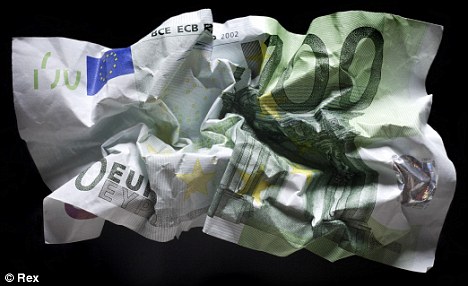 ‘The inevitable break-up of the eurozone.’

SAN FRANCISCO (MarketWatch) — A bailout of Greece will only delay the inevitable breakup of the Eurozone because the one-size-fits-all interest rate policy imposed by the euro has left several countries in the region uncompetitive, Societe Generale strategist Albert Edwards said Friday.

Edwards, a noted bear, warned about the Asian currency crisis of the late 1990s before it happened. That turmoil led to Russia’s debt default and the collapse of hedge fund Long-Term Capital Management.

“The situation in Greece following hard on the heels of similar solvency issues in Dubai feels to me very much like the Russian default and LTCM blow-up in 1998,” SocGen’s /quotes/comstock/24s!e:gle (FR:GLE 39.00, -1.26, -3.13%) Edwards wrote in a note to investors Friday.

European leaders vowed this week to save Greece from a fiscal crisis that’s pushed the country’s relative borrowing costs to the highest level since the country joined the Eurozone more than a decade ago.

“Any ‘help’ given to Greece merely delays the inevitable break-up of the eurozone,” Edwards wrote.

Such concerns have triggered a slump in the euro in recent weeks. It’s also fueled a jump in relative borrowing costs for other countries in Europe with big fiscal deficits, such as Portugal, Ireland and Spain. With Greece included, this group has become known as the PIGS.

“The problem for the PIGS is that years of inappropriately low interest rates resulted in overheating and rapid inflation, even though interest rates might well have been appropriate for the eurozone as a whole,” Edwards explained.

“With most trade done with other eurozone countries, the root problem for the PIGS is lack of competitiveness within the eurozone — an inevitable consequence of the one size fits all interest rate policy,” he added.

“Even if the PIGS governments could slash their fiscal deficits, as Ireland is attempting, to maintain credibility with the markets in the short term, the lack of competitiveness within the eurozone needs years of relative (and probably given the outlook elsewhere, absolute) deflation,” the strategist said.

One option would be for Greece to drop out of the eurozone. Once it has its own currency again, the country could devalue it to become more competitive. That may be politically more palatable than a prolonged period of deflation and economic stagnation, Edwards said.

“The political ‘consensus’ within the PIGS to remain in the eurozone could falter in the face of another of Europe’s unfortunate tendencies — the emergence of small extreme parties to take advantage of any unrest,” he wrote. “There is little ‘help’ that can be offered by the other eurozone nations other than temporary confidence-giving ‘sticking plasters’ before the ultimate denouement: the break-up of the eurozone.”
European bonds

Greece’s crisis has revived concerns about the Eurozone that have festered since the decision to launch the currency was made at the Maastricht summit in the Netherlands in 1991. Some worried that a single currency and monetary policy may not work without a single fiscal policy for the region to match. Read David Marsh’s column.

Now that European leaders have pledged to help Greece, fiscal policies in the region may become more aligned, according to Marc Chandler, head of currency strategy at Brown Brothers Harriman.

“Out of this crisis, the eurozone is likely to create the mechanisms that prevent a repeat of the fiscal laxity,” he said. “Rather than the disintegration of the euro zone or the EU that some prophets of doom and gloom are arguing is likely, the more likely result is that there will be more integration (not less) and that means a further surrender of sovereignty.”

Still, the European Union faces a “horrible dilemma,” he added. The region must try to avoid the “moral hazard” of bailing out a fiscally lax member like Greece, while not necessarily putting a firewall around other less-creditworthy countries in Europe, Chandler said.

Doing nothing could mean “the rout turns into a capital strike,” he added.

Chandler also said the development of a European bond market could help. Right now, individual countries in the region still issue their own bonds.

A European bond could serve as a benchmark for the region and it could be used to ensure financing for countries like Greece, with conditions that the European Commission enforces, Chandler explained.

“The bonds could be guaranteed by a number of triple-A names, like the Germany, France, the European Bank for Reconstruction and Development, and the European Investment Bank,” he added.

However, this won’t solve the fundamental problem in the eurozone, which is competitiveness, he said.

“Germany has kept an iron fist on unit labor costs. No one in the euro zone has been able to match that,” Chandler said.

Before the euro, countries would devalue their currencies to recoup competitiveness before inflation ate it away again. That solution was taken away by the single currency.

“Fiscal policy appeared to offer a way to evade the competitive issue, but at a steep price,” Chandler said.

Alistair Barr is a reporter for MarketWatch in San Francisco.