For the third time in 18 months the global financial system risks spinning out of control unless political leaders take immediate and radical action. 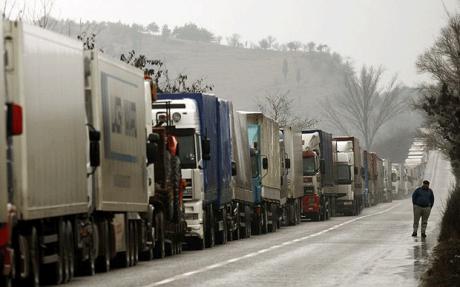 A driver stands near parked trucks on the road leading to the Kulata border crossing between Bulgaria and Greece. The roadblock was set up by farmes protesting higher taxes.

Flow data shows an abrupt withdrawal of German and Asian capital from Club Med debt markets. The EU’s refusal to offer Greece anything beyond stern words and a one-month deadline for harsher austerity – while admirable in one sense – is to misjudge how fast confidence is ebbing. Greece’s drama has already metastasised into a wider systemic crisis. The world risks a replay of the Lehman collapse if this runs unchecked, this time involving sovereign dominoes.

The scale matches America’s sub-prime/Alt-A adventure and assorted CDOs and SIVS of the Greenspan fling. The parallels are closer than Europe cares to admit. Just as Benelux funds and German Landesbanken bought subprime debt for high yield with AAA gloss, they bought Spanish Cedulas because these too had a safe gloss – even though Spain’s property boom broke world records. They thought EMU had eliminated risk: it merely switched exchange risk into credit risk.

A fat chunk of Club Med debt has to be rolled over soon. Capital Economics said the share of state debt maturing this year is even higher in Spain (17pc) than in Greece (12pc), though Spain’s Achilles’ Heel is mortgage debt.

The risk is the EMU version of Mexico’s Tequila crisis or Asia’s crisis in 1998. This Ouzo crisis is coming to a head just as tougher bank rules cause German lenders to restrict loans, and it touches on the most neuralgic issue of our day: that governments themselves are running low. Britain, France, Japan, and the US are all vulnerable. All must retrench. The great “reflation trade” of 2009 is over.

Far from containing the crisis, Europe’s response recalls the Lehman/AIG events of 2008 when Brussels sat frozen, and Germany dragged its feet. On that occasion France took charge, in the nick of time.

Today’s events will not wait. The rocketing cost of (CDS) default insurance on Iberian debt speaks for itself. Lisbon retreated from a €500m bond issue last week, even before the government lost a crucial finance vote. Can Athens raise money at all on viable terms?

There are echoes of early 2009 when East Europe blew up, with contagion hitting global bourses, commodities, and iTraxx credit indices. That episode was halted by the G20 deal to triple the IMF’s fire-fighting fund to $750bn. The odd twist today is that Greece cannot turn to the IMF because that offends EMU pride, yet no other help is on offer because the EU has no fiscal authority. Greece lies prostrate between two stools.

Both the City and Brussels seem certain that Europe will conjure a rescue, crossing the Rubicon towards fiscal federalism and a debt union. The emergency aid clause of Article 122 is on everybody’s lips. Insiders talk of a “Eurobond”.

On balance, such a rescue is likely. Yet leaving aside whether North Europe can afford to guarantee Club Med debt – or whether a bail-out pollutes more countries, as HBOS polluted Lloyds – there is one overwhelming fact missing from the debate: Germany has not endorsed any such rescue.

Jurgen Stark, Germany’s champion at the European Central Bank, said markets are “deluding themselves” if they think others will pay to save Greece. He shot down Article 122, saying Athens was responsible for its own mess.

Bundesbank chief Axel Weber said it would be “politically impossible” to ask taxpayers to bail out a profligate state. Both the finance and economy ministers have forsworn a rescue. Die Welt has called for Greek withdrawal from the euro.

I cannot judge how much is brinkmanship, pressure to make Club Med sweat. But I remember vividly lunching with the British prime minister’s economic adviser in August 1992 and being told that Germany would soon rescue sterling in the Exchange Rate Mechanism by cutting rates. Such was the self-deception of the British elite. Anybody following German politics – such as George Soros- knew it was nonsense.

Germany is harder to read today. The euro is a giant step beyond the ERM. Yet there are powerful counter-currents. Germany’s constitutional court issued a crushing put-down of EU pretensions last June, ruling that the sovereign states are “Masters of the Treaties” and that EU bodies lack democratic legitimacy.

So if you are betting that Germany must forever more efface itself for the European Project, be careful. Berlin hawks might prefer to lance the Club Med boil sooner rather than later.