The wealthy clients are leaving UBS. UBS is bleeding to death. 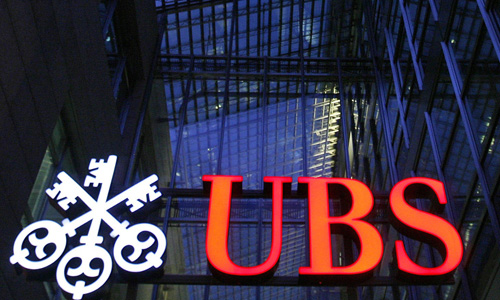 LONDON, Feb 9 (Reuters) – UBS will pay about 2.9 billion Swiss francs ($2.7 billion) in cash bonuses for 2009, up about a third from depressed payouts a year earlier, the Swiss bank said on Tuesday.

UBS said the variable compensation payment did not include deferred share awards and was up 34 percent from 2008, when the bank made a record loss. It will also be shared by fewer staff.

UBS returned to a fourth-quarter profit of 1.2 billion francs, its first quarterly net profit since Oswald Gruebel took the helm a year ago. [ID:nLDE61802M]

Personnel expenses for 2009 totalled 16.5 billion francs, up 2 percent from 2008. The bank had 65,233 employees at the end of the year, down 16 percent from a year earlier, as Gruebel pushes through an aggressive plan to revive its fortunes after the credit crisis and a bitter U.S. tax row.

UBS declined to say how much it would give staff in shares. Many banks have said they will raise fixed salaries and pay a higher proportion of bonuses in stock and defer more over several years.

The Swiss bank overhauled its compensation structure at the end of 2008 and told staff in October it would further reform its pay by hiking fixed salaries and matching bonuses to sustainable performance, but wouldn’t implement the changes until key units returned to profit, according to an internal memo. [ID:nLR11973]

European banks are in the process of advising staff of their payouts, under intense scrutiny on bonuses. Politicians, backed by an angry public, have vowed to clamp down on bumper payouts so soon after many banks were bailed out with taxpayer cash.

Deutsche Bank (DBKGn.DE) said last week it paid 11.3 billion euros in compensation last year, up 18 percent on 2008. The German bank said it would set aside 225 million euros ($312 million) to pay a one-off tax on bonuses in London. UBS, another of the biggest investment banks in the City, declined to say if it had set aside anything for the levy. [ID:nLDE61329C] (Reporting by Steve Slater, editing by Will Waterman) ($1=1.074 Swiss Franc)