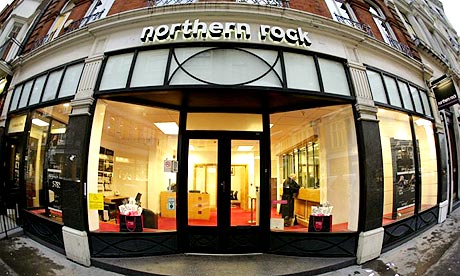 Northern Rock, one of the banks in which the British government has a majority stake. Standard & Poor’s said reliance on state support contributed to its move to downgrade the banking industry’s rating

Britain’s banking industry was downgraded by the international credit rating agency, Standard & Poor’s, as a result of the country’s “weak economic environment” and the banks’ “high” dependence on state support.

In its second major intervention in Britain in the past year, the agency announced that it was demoting Britain’s banking industry by one tier to its Group 3 out of 10. Banks in Canada, France and Germany are in the first and second groups.

The agency, which placed Britain on “negative watch” last May, said it had acted in light of Britain’s “weak economic environment, the reputational damage we believe has been experienced by the banking industry, and what we see as the high dependence on state-support programs of a significant proportion of the industry”. The government has a majority stake in two banks – RBS and Northern Rock.

Nigel Greenwood, S&P’s credit analyst, said: “In our opinion, the weak UK economy will continue to hinder the credit profile of the UK banking industry. This reflects the sharp decline in economic output and our expectation that the unwinding of the high level of debt – of the government, households, and certain industrial segments – will weigh heavily on relative economic growth prospects and banks’ financial performance.

“In our opinion, the near collapse of a number of financial institutions damaged the reputation of the UK banking system. This led to wide-ranging state support, including significant government stakes in two of the four major banking groups. We note that there is a wide dispersion in credit quality among UK banks and that some banks did not require direct government support.”

The intervention by S&P comes less than a year after it announced that Britain could lose its AAA credit rating. In May last year the agency said there was a “one in three” chance that Britain’s rating on its sovereign debt might be cut. A lower credit rating pushes up the cost of borrowing.

Mark Hoban, the shadow Treasury minister, said: “This is disappointing but demonstrates the need for reforms to the banking sector so that we don’t repeat the mistakes of the last decade. The plans set our in our white paper, From Crisis to Confidence: A Plan for Sound Banking, should help restore the reputation of the UK banking sector.”