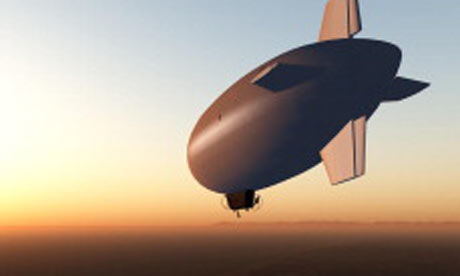 They reveal the partnership intends to begin using the drones in time for the 2012 Olympics. They also indicate that police claims that the technology will be used for maritime surveillance fall well short of their intended use – which could span a range of police activity – and that officers have talked about selling the surveillance data to private companies. A prototype drone equipped with high-powered cameras and sensors is set to take to the skies for test flights later this year.

The Civil Aviation Authority, which regulates UK airspace, has been told by BAE and Kent police that civilian UAVs would “greatly extend” the government’s surveillance capacity and “revolutionise policing”. The CAA is currently reluctant to license UAVs in normal airspace because of the risk of collisions with other aircraft, but adequate “sense and avoid” systems for drones are only a few years away.

Five other police forces have signed up to the scheme, which is considered a pilot preceding the countrywide adoption of the technology for “surveillance, monitoring and evidence gathering”. The partnership’s stated mission is to introduce drones “into the routine work of the police, border authorities and other government agencies” across the UK.

Concerned about the slow pace of progress of licensing issues, Kent police’s assistant chief constable, Allyn Thomas, wrote to the CAA last March arguing that military drones would be useful “in the policing of major events, whether they be protests or the ­Olympics”. He said interest in their use in the UK had “developed after the terrorist attack in Mumbai”.

Stressing that he was not seeking to interfere with the regulatory process, Thomas pointed out that there was “rather more urgency in the work since Mumbai and we have a clear deadline of the 2012 Olympics”.

BAE drones are programmed to take off and land on their own, stay airborne for up to 15 hours and reach heights of 20,000ft, making them invisible from the ground.

Far more sophisticated than the remote-controlled rotor-blade robots that hover 50-metres above the ground – which police already use – BAE UAVs are programmed to undertake specific operations. They can, for example, deviate from a routine flightpath after encountering suspicious ­activity on the ground, or undertake numerous reconnaissance tasks simultaneously.

The surveillance data is fed back to control rooms via monitoring equipment such as high-definition cameras, radar devices and infrared sensors.

Previously, Kent police has said the drone scheme was intended for use over the English Channel to monitor shipping and detect immigrants crossing from France. However, the documents suggest the maritime focus was, at least in part, a public relations strategy designed to minimise civil liberty concerns.

“There is potential for these [maritime] uses to be projected as a ‘good news’ story to the public rather than more ‘big brother’,” a minute from the one of the earliest meetings, in July 2007, states.

Behind closed doors, the scope for UAVs has expanded significantly. Working with various policing organisations as well as the Serious and Organised Crime Agency, the Maritime and Fisheries Agency, HM Revenue and Customs and the UK Border Agency, BAE and Kent police have drawn up wider lists of potential uses.

One document lists “[detecting] theft from cash machines, preventing theft of tractors and monitoring antisocial driving” as future tasks for police drones, while another states the aircraft could be used for road and railway monitoring, search and rescue, event security and covert urban surveillance.

Senior officers have conceded there will be “large capital costs” involved in buying the drones, but argue this will be shared by various government agencies. They also say unmanned aircraft are no more intrusive than CCTV cameras and far cheaper to run than helicopters.

Partnership officials have said the UAVs could raise revenue from private companies. At one strategy meeting it was proposed the aircraft could undertake commercial work during spare time to offset some of the running costs.

There are two models of BAE drone under consideration, neither of which has been licensed to fly in non-segregated airspace by the CAA. The Herti (High Endurance Rapid Technology Insertion) is a five-metre long aircraft that the Ministry of Defence deployed in Afghanistan for tests in 2007 and 2009.

CAA officials are sceptical that any Herti-type drone manufacturer can develop the technology to make them airworthy for the UK before 2015 at the earliest. However the South Coast Partnership has set its sights on another BAE prototype drone, the GA22 airship, developed by Lindstrand Technologies which would be subject to different regulations. BAE and Kent police believe the 22-metre long airship could be certified for civilian use by 2012.

Military drones have been used extensively by the US to assist reconnaissance and airstrikes in Afghanistan and Iraq.

But their use in war zones has been blamed for high civilian death tolls.

– Council bans British parents from public playgrounds, because they have not undergone criminal record checks (Telegraph)