– Afghanistan: more than 300 US soldiers killed this year (Telegraph):

The latest death pushed to the number of American soldiers killed in Afghanistan so far this year to 301, according to the icasualties.org website.

The number is nearly twice the 155 American soldiers killed in 2008, when total foreign troop deaths numbered 295 for the entire year.

Those soldiers could still be alive …

Lie and send a few hundred US soldiers to death, get the Nobel Peace Prize!!! 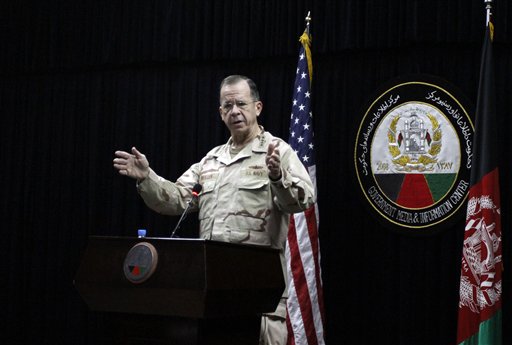 The U.S. Joint Chiefs of Staff chairman Adm. Mike Mullen gestures during a press conference in Kabul, Afghanistan on Monday, Dec. 14, 2009. America’s top military officer is expressing concern about the “growing level of collusion” between Taliban insurgents in Afghanistan and al-Qaida and other militants across the border in Pakistan.(AP Photo/Musadeq Sadeq)

Admiral Mike Mullen, chairman of the Joint Chiefs of Staff, arrived in Kabul as the latest of a clutch of high-ranking U.S. officials seeking to explain Obama’s new strategy to Afghans in the days since Obama announced a further 30,000 troops.

Mullen, who said he will meet with Afghan President Hamid Karzai later in the day and intends to visit Islamabad later in the week, said he remained “deeply concerned by the growing collusion between Afghan Taliban and al Qaeda.”

He said he had met with U.S. Marines in Camp Legune in North Carolina before coming to Kabul and warned them to prepare for a tough fight.

“I told my troops headed here to steel themselves for more combat and more casualties, even as I urged them to use the time before deployment to learn all they can about the Afghan culture … local dialects,” Mullen told reporters in Kabul.

“For the veterans among them, (I told them) to expect Afghanistan to be a different place than it was when they were last here. The insurgency has grown more violent, more pervasive and more sophisticated,” he added.

Record numbers of U.S. troops have been killed in Afghanistan this year, most of them by insurgent-laid home-made bombs in the south and east of the country.

In one of the bloodiest days for the Afghan police force in many months, 15 policemen were killed in two separate attacks — in one attack in Helmand province, three police turned on their own colleagues killing seven of them in their beds.

Mullen said he had met with the Afghan interior minister and discussed the challenges of training police and producing a quality force at a time when their numbers need to aggressively increase in order to meet ambitious recruitment targets.

“We’re all very focused on this,” Mullen said, adding that the issue of corruption within the police was the main focus of efforts to train and improve them.

“None of us underestimate the challenges and that kind of loss can’t be sustained and they must be properly trained.”

Mullen said U.S. Marines who deployed in Afghanistan in May — when Obama last ordered a major increase — had achieved success in Helmand province because of the way they had partnered with Afghan security forces.

The commander of foreign troops in Afghanistan, General Stanley McChrystal, has made the expansion and improvement of the Afghan army and police one of the main planks of his strategy.

Afghanistan’s Defense Minister has said between 8,000 and 10,000 Afghan soldiers are headed for Helmand province, where U.S. and British commanders complain they do not have enough Afghans to help hold territory that they clear of fighters.

Obama announced his new strategy this month as the latest attempt to turn the tide of the insurgency and put the United States and its allies on the front foot as the war enters its ninth year but support for the conflict among Americans wanes.

Obama also said U.S. withdrawal from Afghanistan will start in July 2011. U.S. officials have repeatedly stressed to Afghans that the withdrawal that follows would not be sudden.

Mullen reiterated Washington’s intention to start scaling back militarily, but said U.S. involvement in Afghanistan would continue for the foreseeable future.

“Eventually, beginning in July 2011, our troop levels will thin and we will not have as large a military presence here. Obama made it abundantly clear: our national commitment to Afghanistan will endure but our military presence will not.”

He said he would leave for Pakistan later in the week to meet with his counterpart there, General Ashfaq Kayani.

He said he was impressed by advances Kayani made in south Waziristan but intended to discuss improving coordination between Kabul, Islamabad and Washington in eliminating safe havens.

(Additional reporting by Ismael Sameem in KANDAHAR and Ahmad Elham in KUNDUZ; Writing by Golnar Motevalli; Editing by Peter Graff and Bill Tarrant)