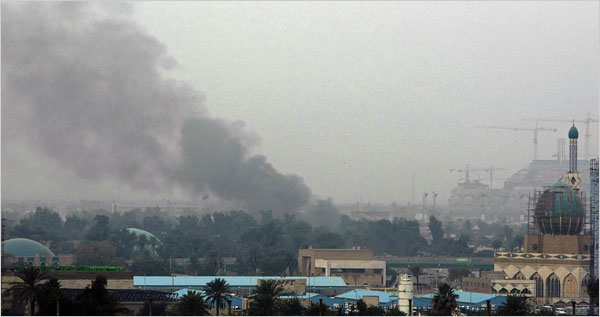 Smoke from the bombings billowing in the Baghdad sky on Tuesday.

BAGHDAD — A series of devastating car bombings rocked Baghdad on Tuesday, killing at least 121 people and wounding hundreds more, according to preliminary accounts by witnesses, the police and hospital officials.

Five bombs in all, including at least three suicide attacks, struck near a college, a court complex in western Baghdad, a mosque and a market and a neighborhood near the Interior Ministry in what appeared to be a coordinated assault on the capital.

The blasts began shortly after 10 a.m. and reverberated through the city for the next 50 minutes, sending enormous plumes of black smoke into the air.

The attacks came as Iraq’s Presidency Council announced a date — March 6 — for the country’s long-delayed parliamentary elections. And furor over Tuesday’s bombings immediately became political, with prospective candidates blaming the security forces and the government of Prime Minister Nuri Kamal al-Maliki for failing, once again, to secure the heart of Baghdad.

Many victims linked the attacks to the protracted political jockeying over holding the election, which was originally scheduled for January. “Are we cursed?” yelled a young woman near the mosque that was struck in Qahira, in northeast Baghdad. She had burns over her arms and legs. “When will we be finished with this election issue?”

The attacks were the worst in Iraq since twin suicide bombings destroyed three ministries on Oct. 25, killing at least 155 people. They fit a pattern of spectacular attacks in the capital, followed by weeks of relative calm. In August, two suicide car bombs exploded near the country’s Finance and Foreign Ministries, killing at least 122.

Those attacks became known as Bloody Sunday and Bloody Wednesday, respectively. Across the city, officials and ordinary Iraqis added the adjective to Tuesday, as well. All of them illustrated the shortcomings of Iraq’s security forces, which despite an overwhelming presence at checkpoints across the city, appear unable to stop carefully orchestrated terrorist operations.

“There is no explanation at all for such a horrible security failure,” said Muhammad al-Shalam, a Sunni member of Baghdad’s Provincial Council, which met on Tuesday in a building damaged in October. “The security forces are totally responsible for all this blood.”

One of the deadliest of Tuesday’s bombings occurred at a compound in western Baghdad that includes the Cassation Court, which handles appeals and which moved to the area after the attack in October. A suicide bomber plowed his car through the main checkpoint leading into the compound and denoted explosives hidden inside. The attack occurred near Zawra Park, which includes the city’s zoo and amusement areas.

Among dozens killed there were several judges, a spokesman for the Supreme Judicial Council, Abdul Sattar al-Biriqdar, said in an interview. The court buildings were severely damaged.

The office of a former prime minister, Ayad Allawi, was 300 yards from the blast; its windows were shattered, its doors wrenched from their jambs.

A spokeswoman for Mr. Allawi, who has announced a political coalition with a senior secular Sunni leader, Salih al-Mutlaq, released a statement on their behalf denouncing the failure of Mr. Maliki’s government to stop the bombings.

“The government always forms investigation committees after each explosion, but it comes up with nothing later,” the spokeswoman said.

Mr. Maliki’s office issued a statement, once again casting blame on remnants of the Baath Party in exile, working in league with Al Qaeda of Mesopotamia, though officials have yet to provide persuasive evidence implicating any of them. Mr. Maliki’s opponents have accused him of focusing exclusively on the Baath Party to bolster his political standing among Shiites.

“These cowardly terrorist attacks that took place in Baghdad today, after the Parliament succeeded in overcoming the last obstacle to conducting elections confirms that the enemies of Iraq and its people are aiming at creating chaos in the country, blocking political progress and delaying the elections,” Mr. Maliki said in a statement.

The attacks bore the signature of previous attacks by the Islamic State of Iraq, an umbrella group for Al Qaeda in Mesopotamia and other terrorist networks in the country. It claimed to have carried out the August and October attacks.

The bombings began in Dora, in southern Baghdad, when a suicide bomber detonated a car full of explosives as he passed a police patrol near the main entrance to the Technical Institution, a vocational college. At least nine people were killed, including three police officers in the patrol. At least 31 others were taken to the hospital, many of students. Broken glass, body parts, blood and sewage covered the street for hundreds of yards.

Another of the attacks struck the headquarters of the Rafaidyan Bank, where many workers from the Finance Ministry moved after the ministry’s building was destroyed in the August bombings.

“The bomber wanted numbers,” Capt. Said al-Dairi of the Federal Police said at the scene in Dora. “He wanted to kill as many people as possible.” Referring to the intent of Tuesday’s attacks, he added, “They want to create a scene of confusion and chaos.”

American helicopters, drones and airplanes circled the city in the immediate aftermath, while sporadic gunfire could be heard. In addition to the aircraft, American troops, including explosives-removal teams, joined Iraqi security forces responding to the attacks, a military spokesman, Maj. Joe Scrocco, said in a statement. In the attacks in August and October, Iraqi forces kept the Americans at arm’s length, allowing them to play a minimal, and belated, role in helping assist the wounded and collect forensic evidence.