MANILA, Philippines –(UPDATE)“Unconstitutional,” “overreaction,” and “overkill” were just some of the reactions by lawmakers at the House of Representatives over President Gloria Macapagal-Arroyo’s declaration of martial law in Maguindanao Saturday.

Opposition lawmakers said they would question before the plenary the basis of Proclamation 1959, which placed Maguindanao, except in areas occupied by the Moro Islamic Liberation Front, under martial law and suspended the writ of habeas corpus.

“Under the Constitution, President Gloria Macapagal-Arroyo may only declare martial law or suspend the writ of habeas corpus in case of invasion or rebellion. These conditions do not exist, ergo Proclamation 1959 is unconstitutional,” Bayan Muna partylist Representative Satur Ocampo said in a text message. 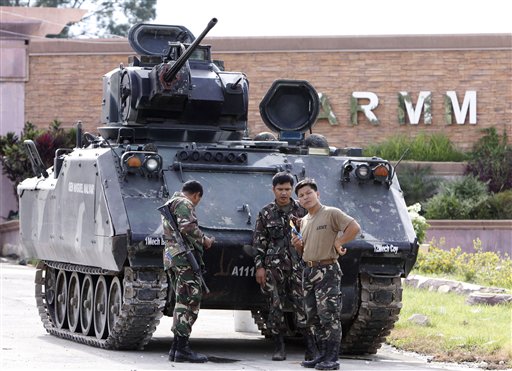 Soldiers take a break as they stand in front of their armored personnel carrier at the gate of the Autonomous Region of Muslim Mindanao Saturday, Dec. 5, 2009 in Shariff Aguak town in Maguindanao province in southern Philippines. Government soldiers took the patriarch of a powerful clan, a former governor, and three other members of his family into custody after President Gloria Macapagal Arroyo put the entire province under martial law to hunt down suspects in the country’s worst political violence. (AP Photo/Pat Roque)

Thousands of troops, backed by tanks and warplanes, have taken control of Maguindanao province in a government crackdown on the powerful Ampatuan clan, accused in the Nov. 23 killing of 57 people traveling in a convoy of a political rival. The clan has denied involvement.

Late Friday, President Gloria Macapagal Arroyo imposed martial law in Maguindanao — the first use of martial law in the Philippines since late dictator Ferdinand Marcos imposed it nationwide more than 30 years ago. The move was announced on national television Saturday morning.

The government says it feared the Ampatuans, who have ruled unopposed with an iron fist over predominantly Muslim Maguindanao for years, were fomenting rebellion in response to the crackdown on them since the massacre.

Those arrested so far include the clan’s patriarch, at least six other family members, and clan followers, national police Chief Jesus Verzosa said.

Thirty-nine high-powered firearms and crates of ammunition were dug up Sunday at a farm believed owned by the Ampatuans near the provincial capital of Shariff Aguak, army Brig. Gen. Gaudencio Pangilinan said.

Fearing violence, some residents have fled towns in Maguindanao, about 545 miles (880 kilometers) south of Manila. Heavily armed troops manned checkpoints and frisked motorists along the main highway that cuts through farmland, hills and marshland in the province.

“I advise you to stay put and be calm or go about your daily chores,” regional military commander Lt. Gen. Raymundo Ferrer said. “Only those having to do with the massacre will be arrested and their houses searched.”

Pro-democracy advocates have accused Arroyo of overreacting. A group of human rights lawyers has argued there are insufficient grounds for martial law and plan to challenge it in the Supreme Court on Monday.

Government and military officials defended Arroyo, saying she acted decisively to bring suspects into custody and head off a rebellion by the Ampatuan clan.

The Ampatuans are notorious for running a large private army. They helped Arroyo win crucial votes from Maguindanao during 2004 elections, but her party expelled the clan after the massacre.

Among the family members now being held, Andal Ampatuan Sr., a three-term provincial governor, and his son Zaldy — governor of the Autonomous Region in Mindanao, which includes Maguindanao — were taken into military custody early Saturday, Ibrado said. Two other sons were also detained.

Another son, Andal Jr., surrendered and was charged last week with multiple counts of murder.

Some 30 journalists were among the dead, making it the deadliest single attack on the press anywhere in the world.