– Cost for a single soldier to fight in Iraq or Afghanistan is about $775,000 per year

Shall we call that inflation or what?

Chairman of the appropriations subcommittee with authority over the
Pentagon’s budget: The buildup will probably cost at least $40 billion 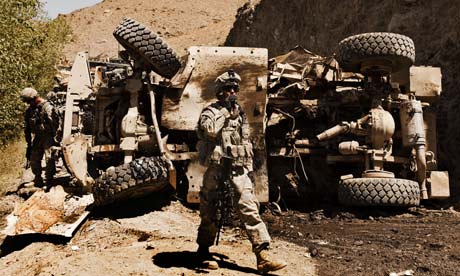 A US soldier inspects the site of a bomb attack in Afghanistan. Photograph: Dima Gavrysh/AP

Dec. 2 (Bloomberg) — Congress will probably have to approve a war-funding bill next year worth at least $40 billion to pay for President Barack Obama’s troop buildup in Afghanistan, a House Democrat said.

Representative John Murtha, chairman of the appropriations subcommittee with authority over the Pentagon’s budget, said today the buildup will probably cost at least $10 billion more than the administration’s $30 billion estimate.

Obama said yesterday he will add 30,000 U.S. troops in Afghanistan for a total of about 100,000, and then begin a drawdown in July 2011, depending on security conditions there. Democrats, some of whom oppose the troop increase, embraced the timeline as a possible way out of the war. Republicans gave qualified support to Obama’s strategy, criticizing the timetable aspect of it.

Murtha declined to predict what restrictions lawmakers may put on the money request, such as making Obama’s proposal to begin withdrawing troops in July 2011 mandatory. He said he wants benchmarks to measure the Afghan government’s progress toward goals such as training its military. He also called for a surtax to finance the war, saying the U.S. risks the sort of inflation seen in the Vietnam era.

Using a supplemental war-funding bill to pay for the Afghanistan buildup would contradict the Obama administration’s announcement earlier this year that it would end former President George W. Bush’s practice of using such measures to fund the wars in Iraq and Afghanistan.

Congress considers supplemental spending bills outside the annual budget process. Such measures are exempt from annual spending limits and frequently include funds unrelated to the Defense Department. Lawmakers from both parties say the use of supplemental bills makes it harder to control federal spending.

Murtha said he didn’t see how the administration could avoid another supplemental bill. “You can’t do it,” he said. “They don’t have the money to operate under the present budget.”

Lawmakers won’t provide additional money under a 2010 defense budget bill likely to win congressional approval this month because that wouldn’t leave enough time to scrutinize the spending, he said.

White House spokesman Robert Gibbs told reporters today the administration will look at “what amount of funding is currently there, for how long,” for the buildup. Obama has “been clear” on the use of supplemental funding, Gibbs said, though he added that no final decisions have been made.

Murtha said he’s “not sure that there’s a threat to our national security” in Afghanistan because the terrorist network al-Qaeda “can go anyplace — they don’t have to be in Afghanistan. Somalia, they can be in.”

Representative Anna Eshoo, a California Democrat who sits on the Intelligence Committee, voiced similar doubts. She said, though, that Obama’s plan “could be a policy that skids through with the help of some Democrats and some Republicans.”

In expressing his skepticism about the administration’s estimate that the troop buildup would cost $30 billion, he said, “Who’s been right most of the time? My staff’s more right than they are.”

He also said he wants to cut the number of contractors in Afghanistan, which he estimated at 104,000, saying it would be less expensive for the Pentagon to hire its own workers.

Defense Secretary Robert Gates and Secretary of State Hillary Clinton appeared today before the Senate Armed Committee to discuss the administration’s plans. Next week, they will testify before Murtha’s panel.

To contact the reporters on this story: Brian Faler in Washington at bfaler@bloomberg.net