“We are strong and persistent.”

No, Dubai is weak and dependent. Dubai is broke and has already been bailed out twice by Abu Dhabi and this would be the third time, but … Abu Dhabi will not race to bailout Dubai

“They do not understand anything.”

That was before, now even the most stupid investors do understand!

Dubai has been built ‘on sand’. The dream behind Dubai is artificial and meaningless.

Dubai’s dream is backed by nothing. Dubai is an illusion. I told you in 2008 about the plans of the elite to “drive the Arabs back into the desert” and that Dubai will go bust.

This is the same elite that governs the Fed and controls the entire US government. They will also destroy the US dollar and turn the US into a Third World country if they are not stopped now. 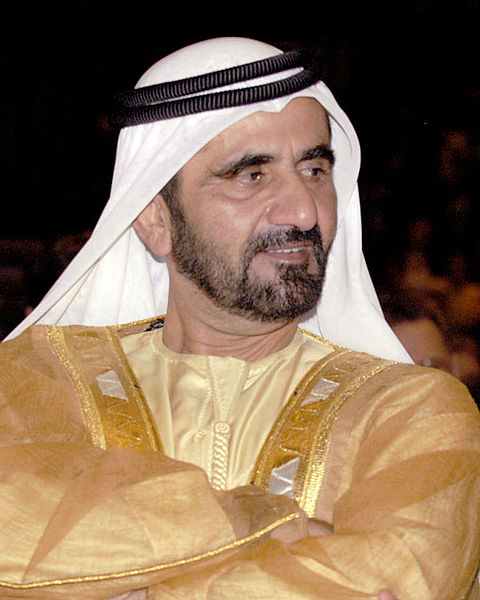 Sheikh Mohammed bin Rashid al-Maktoum, the ruler of Dubai, today criticised international investors’ reaction to the Emirate’s debt crisis, claiming: “They do not understand anything.”

The defiant ruler, whose Government yesterday washed its hands of Dubai World, the state-owned conglomerate that owes $59 billion (£35.8 billion), also said: “We are strong and persistent.”

Sheikh Mohammed’s comments follow support from Sheikh Khalifa bin Zayed al-Nahayan, President of the United Arab Emirates, who said that Dubai’s leader and his Cabinet “face every morning challenges, but plan to remove all obstacles to score achievements”.

Last week, the Dubai Government sparked panic across global stock markets when it announced that it had asked creditors to Dubai World for a six-month standstill on its debts, raising fears that global banks could face a new wave of writedowns.

However, markets have since calmed, and today America’s leading Dow Jones industrial average jumped 108.52 points to 10,453.36 while London’s blue-chip FTSE 100 index continued this morning’s rise, adding 95.55 points to 5,268.23, after Dubai World revealed that it was in “constructive” talks with creditors about restructuring $26 billion of its debt pile, which could include the sale of assets.

The emergence of discussions has calmed nerves after the Dubai Government effectively abandoned Dubai World yesterday, stating that it did not guarantee the company’s huge debt mountain.

The prospect of asset sales and a restructure saw shares in Royal Bank of Scotland rise 3.68 per cent to 34.38p in early trading today.

Dubai World said that the restructuring was limited to certain subsidiaries, including Nakheel, the troubled property developer, whose $4 billion Islamic bond due for repayment on December 14 triggered the current crisis, and Limitless World.

Dubai World said that these businesses remained on a “stable financial footing”.

Qatari stocks also tumbled, by 8.3 per cent, and the Kuwaiti stock exchange, reopening after the Eid religious holiday, closed 2.71 per cent lower.

About $6 billion of the restructuring relates to Nakheel. Dubai World added: “Nakheel requests its sukuk [bond] holders to appoint an authorised representative with whom discussions can commence.”

Dubai World said that Moelis & Co had been appointed to advise on the restructuring, working alongside Deloitte and Rothschild.