There is no recovery.

– US Treasury Report: Banks Are Cutting Back on Small Business Loans, $10 Billion Evaporates

– The Federal Reserve Doesn’t Want Banks to Increase Lending, Because of Inflation 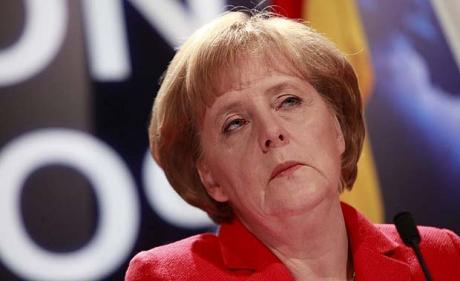 “We are in a very critical situation,” said Chancellor Angela Merkel in her weekly radio address. “We are going to discuss with leaders of the financial institutions what can be done to head off a credit crunch.”

The move comes days after the Bundesbank revealed that German banks face a further €90bn (£82bn) of likely write-downs over the next year.

Leaders of the new coalition are to meet industrialists and bankers tomorrow to thrash out an emergency plan. The proposals include a €10bn scheme to purchase toxic securities from banks. The idea is anathema in Germany and faces stiff opposition from Mrs Merkel’s Bavarian and liberal partners.

The renewed sense urgency follows a flurry of warnings from economists and business groups over the risks of a credit contraction.

A survey by Munich’s IFO institute revealed yesterday that lending conditions in Germany had tightened sharply in November. Some 53pc of large manufacturing companies found credit hard to obtain, suggesting that the problem has spread beyond small firms without access to the bond markets. “The financing situation of firms remains critical and poses a risk to economic recovery,” said the group’s president, Hans-Werner Sinn.

He said it was an error for the government to buy toxic debt, urging Berlin to direct equity stakes in the banks through partial nationalisations.

Volker Treier, chief economist for the German chamber of industry and commerce (DIHK), said worries were mounting among Mittelstand family firms. “The real test has yet to come: the drastic decline in sales has not yet shown up in balance sheets,” he said.

The risk is that a cascade of corporate downgrades by rating agencies forces banks to put aside more equity capital over coming months, compounding the contraction of credit.

German banks have been warning for months that new G20 rules on higher capital ratios are making matters worse, acting in a pro-cyclical fashion at a time when credit is already under pressure. The banking federation has called for a moratorium.

The mystery is why the European Central Bank has allowed private lending in the eurozone to shrink by 0.8pc in the 12 months to October. The M3 has been contracting in absolute terms since April money, the first time this has happened in the region for over half a century.

Gabriel Stein from Lombard Street Research said the ECB risks making a grave error. “It is remarkable for a monetarist central bank not to react when the money supply and credit are contracting. This is likely to exacerbate deflation pressures late next year,” he said.