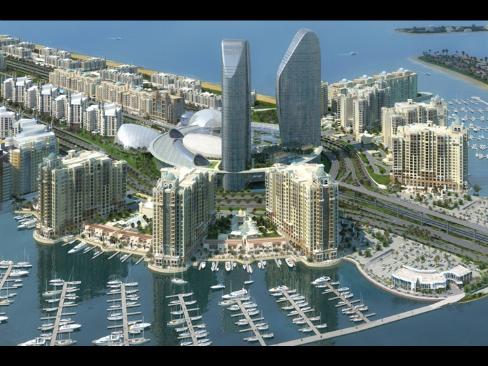 Marina residences at ‘The Palm Jumeirah’ development, also known as Palm Island, built by property developers Nakheel PJSC in Dubai is seen in this undated handout photo released to the media on Nov. 27, 2009. Source: Nakheel via Bloomberg

Nov. 30 (Bloomberg) — Dubai’s government said it hasn’t guaranteed the debt of Dubai World, the state-controlled holding company struggling with $59 billion in liabilities, and that creditors must help it restructure.

“The company received financing based on its project schedule, not a government guarantee,” Abdulrahman Al Saleh, director general of the emirate’s Department of Finance, said in an interview with Dubai TV, when asked whether the government was backing the debt. “Lenders should bear part of the responsibility.”

Dubai’s government said Nov. 25 that Dubai World would seek a standstill agreement with creditors and an extension of loan maturities until at least May 30, 2010. The announcement led to the biggest declines in Asian shares in three months last week and Europe’s worst rout since April. Investors were concerned the proposal risks triggering the biggest sovereign default since Argentina in 2001.

Dubai shares tumbled and Abu Dhabi’s stock index today fell the most in at least eight years on the first trading day since the announcement.

Nakheel PJSC, Dubai World’s property unit whose $3.52 billion Islamic bond is due Dec. 14, asked the Nasdaq Dubai stock market today to suspend its securities “until it is in a position to fully inform the market.”

“The times of implicit support are clearly over,” said Philipp Lotter, vice-president of Moody’s Investors Service in Dubai. “In the past entities such as Dubai World certainly represented themselves as quasi-government entities, whereas there was no legal obligation on behalf of the government to support, and that has certainly shifted with last week’s announcement.”

In the prospectus for its first Islamic bond sale in October, the government said “certain strategic government- related entities of the emirate have significant borrowings which are not direct obligations of the government of Dubai.” The government raised $1.93 billion from local and international investors in the sale.

“If any of these entities are unable to, or are potentially unable to, fulfill their debt obligations, the Dubai government, although not legally obliged to do so and without any obligation whatsoever, may at its sole discretion decide to extend such support as it may deem suitable,” according to the prospectus.

Lenders “have deemed Dubai World as part of the government and that is not true,” al-Saleh said.

To contact the reporter on this story: Vivian Salama in Dubai vsalama@bloomberg.net