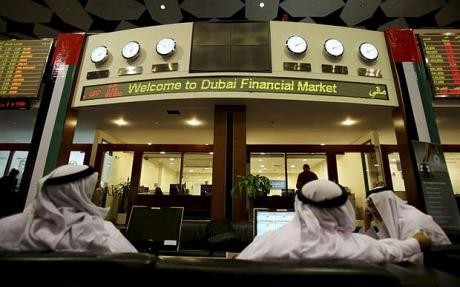 Shares on Dubai’s stock market suffered their biggest one-day fall in more than a year, while Abu Dhabi posted a record one-day drop.

While investors judged that the fall-out from Dubai’s debt crisis will not be enough to derail a global recovery, they remained jittery about the possible fallout for banks which have loaned money to the Gulf state.

The biggest fallers were state-owned Royal Bank of Scotland and bailed-out Lloyds, down 5.8pc and 4.3pc respectively. BarclaysStandard Chartered also fell, with HSBC slightly up. and

Tim Hughes, head of sales trading at IG Index, said: “Today’s move in London could equally just be put down to a normal pullback after Friday’s rise. We are likely to see a lack of direction ahead of the US open and a steady session on Wall Street should ensure that markets return to normality for the rest of the week.”

Dubai has been in the eye of a financial storm since Wednesday when Dubai World, one of the emirates’ holding companies, told investors that it was delaying the repayment of some of its $59bn in debt.

Nakheel, the troubled “Palm Islands” developer at the heart of the crisis, today asked the exchanges to stop trading its bonds until it was in a position to provide further information about the restructuring exercise to which it is being forcefully submitted.

Authorities in the United Arab Emirates sought to reassure investors again yesterday when its central bank issued a statement promising to “stand behind” local and foreign banks operating in the country.

“Central Bank has issued a notice to the UAE banks and branches of foreign banks operating in the UAE, making available to them a special additional liquidity facility linked to their current accounts,” it said. The facility would be at 50 points above the Emirates inter-bank offered rate.

The announcement calmed international fears about exposure to a new debt crisis from the problems afflicting Dubai World, a state-run holding company, and a consequent further credit crunch.

Earlier in Asia, the MSCI Asia Pacific Index climbed 3.3pc, with banks and South Korean conglomerate Samsung, whose engineering arm is responsible for some of Dubai’s prestige high-rises, both doing well.

Nakheel said it wanted the exchanges to halt trading on its three major sukuks, or Islamic bonds, including the $3.5bn (32.1bn) sukuk due in two weeks’ time that is at the centre of the liquidity problems of Dubai World, its parent company.

“Following the announcement on Wednesday 25 November from the Government of Dubai, Nakheel has today asked for all three of their listed sukuks to be suspended until it is in a position to fully inform the market,” it said in a statement to the exchange, Nasdaq Dubai.

Both emirates are rampant with speculation about terms and conditions for a bail-out of Dubai World, but negotiations seem to be continuing at a political level even as the chief restructuring officer, Aidan Birkett of Deloitte, starts going through the books.

At issue are not only unpaid debts but also a string of unfinished property developments across Dubai – and out into the sea.

Nakheel is fully owned by Dubai World and has no listing. Another subsidiary, DP World, though, the ports operator which bought P&O three years ago, fell 15pc to 36.6 cents, even though it has been excluded from the restructuring exercise.

Other big losers in Dubai were property companies. Emaar, another state-run firm, the largest developer in the UAE and the name behind the world’s tallest building, Burj Dubai, fell 9.9pc to 3.75 dirhams.

Like DP World, its credit ratings were cut after the Dubai government statement on Wednesday, which said Dubai World was seeking a standstill on its debt repayments while it restructured.

National Bank of Abu Dhabi, which bought into a new $5bn bond issuance by the Dubai government’s financial support fund on Wednesday, fell 9.7pc to 12.1 dirhams.