Sheikh Mohammed of Dubai is under mounting pressure to explain the emirate’s debt problems, after Abu Dhabi indicated that it will not write a blank cheque to bail out its neighbour. 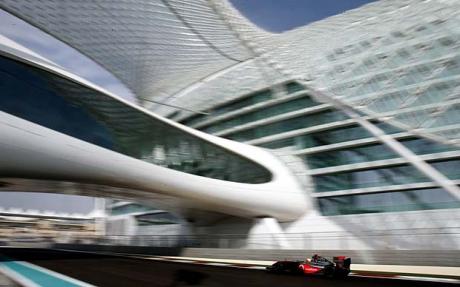 Race is on: power brokers in Abu Dhabi and Dubai are trying to find the right formula to solve the latter’s debt problems. The Yas Marina grand prix circuit in Abu Dhabi is pictured Photo: PA

According to officials, Abu Dhabi, the richest state in the United Arab Emirates, will be cautious about how and whether to assist Dubai World, the state holding company that this week suspended repayments on a $3.5bn (£2.1bn) Islamic bond due in mid-December.

Any sign that Abu Dhabi’s support may not yet be secured could push global markets further into turmoil tomorrow, analysts said, especially if Dubai’s ruler maintains his silence on the crisis beyond this weekend’s Eid religious holiday. Sources said he may be forced to disrupt the 10-day Islamic break to make a statement as early as tomorrow.

“We will look at Dubai’s commitments and approach them on a case-by-case basis. It does not mean that Abu Dhabi will underwrite all of their debts,” a senior Abu Dhabi official said.

“Until things become clearer, it is very difficult to make any further investment decision on the bonds. Many things have to be clarified by Dubai.”

Dubai World’s $59bn of liabilities make up the majority of the emirate’s total $80bn debts.

Sources close to the Dubai government said that the bail-outs of Western companies were being considered as potential models for restructuring the company.

In particular, advisers have suggested ring-fencing the problem debts, particularly from Nakheel, the Dubai World subsidiary, and putting them into a separate run-off.

The model could resemble the “good-bank/bad-bank” structure imposed on Northern Rock – whereby the toxic assets were separated off, leaving the rest of the bank to recover normally.

Sources said that Dubai’s banks could similarly be relieved of the toxic assets, recapitalised and then would be free to inject liquidity into other businesses to ensure the economy recovered quickly.

Investors have long assumed that Dubai, famed for its extravagant skyscrapers and palm-shaped islands built for wealthy celebrities, could count on the financial support of the richer state of Abu Dhabi.

It has already provided $15bn in indirect support for Dubai through the UAE central bank and two private Abu Dhabi banks, but may now take its time over how much more help to offer.

Despite an astonishing property, financial services and tourism boom in recent years, Dubai itself produces only 240,000 barrels of oil per day – a fraction of the 2.7m barrels output of Abu Dhabi.

As a clearer picture emerged of global banking exposure to Dubai World and its property arm Nakheel, there was a spate of responses from credit rating agencies warning on Dubai’s sovereign debt.

“In our view, such a restructuring may be considered a default under our default criteria, and represents the failure of the Dubai government to provide timely financial support to a core government-related entity,” said analysts from Standard & Poor’s.

Neelie Kroes, the European Union competition commissioner, also warned yesterday that rising state debt is a “time-bomb” that could bring down governments, banks and creditors.

She urged banks to repay state aid granted during the banking crisis last year as soon as possible to reduce high levels of government debt.

Meanwhile, analysts raised the possibility that Dubai’s liabilities could be even greater than previously disclosed.

“This could imply that the debt issued by Dubai

in recent weeks is insufficient to meet upcoming redemptions.”

Dubai’s ruler, Sheikh Mohammed, who is also vice-president of the United Arab Emirates, insisted earlier this month that the worst had passed for the state, leaving it well-placed to pursue a clear path of economic growth.

On Saturday several more world leaders urged calm over the Dubai situation. India said it was monitoring the crisis closely, since one fifth of money sent home by its citizens working abroad comes from the United Arab Emirates.

But the Prime Minister, Gordon Brown, on Friday insisted that the world’s financial system was now strong enough to withstand the shock.

The exposure of international banks to Dubai could reach $12bn, with Barclays, Royal Bank of Scotland and HSBC all thought to have substantial liabilties in the desert state.