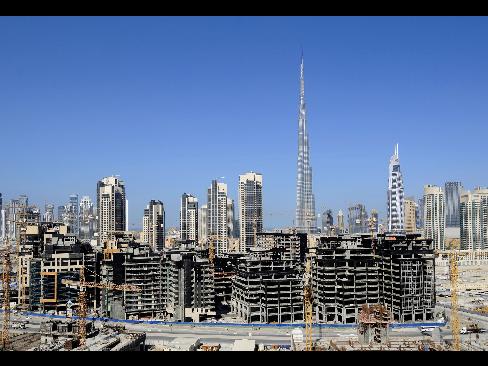 The Burj Dubai, the world’s tallest skyscraper, towers over buildings under construction in the Business Bay area in Dubai, on Nov. 24, 2009. Photographer: Charles Crowell/Bloomberg

“One cannot rule out — as a tail risk — a case where this would escalate into a major sovereign default problem, which would then resonate across global emerging markets in the same way that Argentina did in the early 2000s or Russia in the late 1990s,” Bank of America strategists Benoit Anne and Daniel Tenengauzer wrote in a report.

A default would lead to a “sudden stop of capital flows into emerging markets” and be a “major step back” in the recovery from the global financial crisis, they wrote.

Stocks around the world have slumped for two days on concern a debt restructuring by Dubai World, with $59 billion of liabilities, will add to the $1.72 trillion of losses and writedowns from the global credit freeze. The MSCI Emerging Markets Index fell 1.8 percent to 941.14 as of 11:15 a.m. in New York, extending this week’s decline to 2.5 percent, the biggest in a month.

Dubai, which borrowed $80 billion in a four-year construction boom to transform its economy into a tourism and financial hub, suffered the world’s steepest property slump in the recession. Home prices fell 50 percent from their 2008 peak, according to Frankfurt-based Deutsche Bank AG.

“In a best-case scenario, this will remain limited to a Dubai corporate sector problem, with either some bailout from UAE authorities or a market-friendly debt restructuring,” they wrote.

To contact the reporter on this story: Tal Barak Harif in New York at tbarak@bloomberg.net