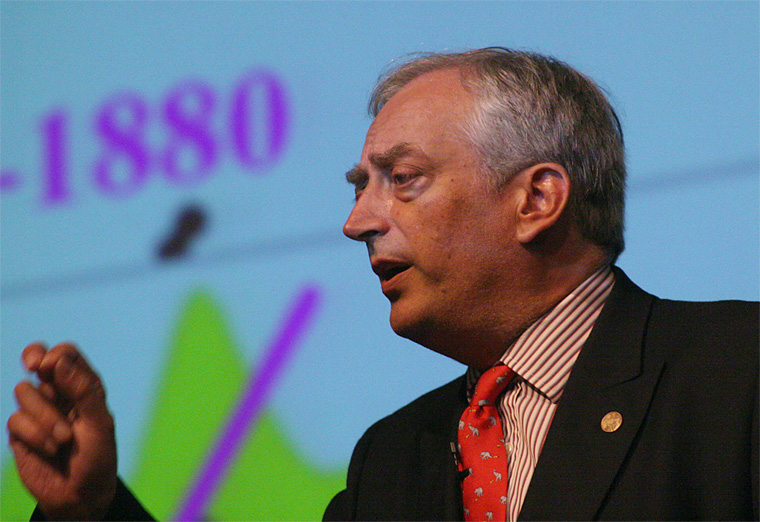 This is what they did — these climate “scientists” on whose unsupported word the world’s classe politique proposes to set up an unelected global government this December in Copenhagen, with vast and unprecedented powers to control all formerly free markets, to tax wealthy nations and all of their financial transactions, to regulate the economic and environmental affairs of all nations, and to confiscate and extinguish all patent and intellectual property rights.

Must-see:
– Lord Christopher Monckton: Is President Obama Poised to Surrender the Constitution and US Sovereignty to World Government?

The tiny, close-knit clique of climate scientists who invented and now drive the “global warming” fraud — for fraud is what we now know it to be — tampered with temperature data so assiduously that, on the recent admission of one of them, land temperatures since 1980 have risen twice as fast as ocean temperatures. One of the thousands of emails recently circulated by a whistleblower at the University of East Anglia, where one of the world’s four global-temperature datasets is compiled, reveals that data were altered so as to prevent a recent decline in temperature from showing in the record. In fact, there has been no statistically significant “global warming” for 15 years — and there has been rapid and significant cooling for nine years.

Worse, these arrogant fraudsters — for fraudsters are what we now know them to be — have refused, for years and years and years, to reveal their data and their computer program listings. Now we know why: As a revealing 15,000-line document from the computer division at the Climate Research Unit shows, the programs and data are a hopeless, tangled mess. In effect, the global temperature trends have simply been made up. Unfortunately, the British researchers have been acting closely in league with their U.S. counterparts who compile the other terrestrial temperature dataset — the GISS/NCDC dataset. That dataset too contains numerous biases intended artificially to inflate the natural warming of the 20th century.

Finally, these huckstering snake-oil salesmen and “global warming” profiteers — for that is what they are — have written to each other encouraging the destruction of data that had been lawfully requested under the Freedom of Information Act in the UK by scientists who wanted to check whether their global temperature record had been properly compiled. And that procurement of data destruction, as they are about to find out to their cost, is a criminal offense. They are not merely bad scientists — they are crooks. And crooks who have perpetrated their crimes at the expense of British and U.S. taxpayers.

I am angry, and so should you be.

What have the mainstream news media said about the Climategate affair? Remarkably little. The few who have brought themselves to comment, through gritted teeth, have said that all of this is a storm in a teacup, and that their friends in the University of East Anglia and elsewhere in the climatological community are good people, really.

No, they’re not. They’re criminals. With Professor Fred Singer, who founded the U.S. Satellite Weather Service, I have reported them to the UK’s Information Commissioner, with a request that he investigate their offenses and, if thought fit, prosecute. But I won’t be holding my breath: In the police state that Britain has now sadly become, with supine news media largely owned and controlled by the government, the establishment tends to look after its own.

At our expense, and at the expense of the truth.

– Climategate: George Monbiot – aka the Great Moonbat – makes it all suddenly OK through medium of satire

2 thoughts on “Lord Christopher Monckton on Climategate: ‘They Are Criminals’”