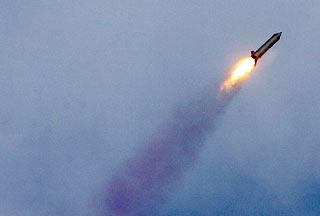 One of Iran’s Shahab-3A missiles

A senior IRGC official warns that Iranian missiles will be on their marks to target the very heart of Tel Aviv in the event of a military attack on the Islamic Republic.

“If the enemy tries its luck and fires a missile into Iran, our ballistic missiles would zero in on Tel Aviv before the dust settles on the attack,” said Mojtaba Zolnour, the representative of the Leader of the Islamic Revolution, Ayatollah Seyyed Ali Khamenei, in the Islamic Revolution Guards Corps (IRGC).

Zolnour, who was speaking in a Saturday interview with the IRNA news agency, said enemy countries should keep in mind that Iran’s military capabilities have made great strides due to the efforts of Iranian experts.

He made the comments shortly after the Iranian Air Force announced that it is preparing for a five-day aerial maneuver named the Sky of Velayat 2.

The large-scale maneuver, which is said to be Iran’s biggest yet, is mainly aimed at developing the country’s aerial defenses against any potential attack on the country’s nuclear plants.

“The aerial defense maneuver will begin on Sunday and last for five days,” said Brigadier General Ahmad Miqani, the commander of the Air Defense Headquarters of Iran’s armed forces.

“It is slated to cover a vast area of some 600,000 square kilometers in the northwest, west, south, and southwest of the country,” he added.