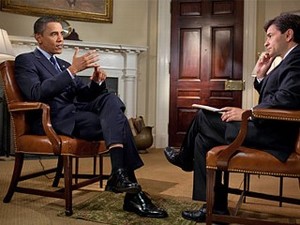 Will Obama cop to the lies he told America before the health care bill passed?

President Obama appeared on ABC’s This Week with George Stephanopoulos in September, insisting that the penalty for those who don’t buy health insurance is not a tax. However, with the passage of  H.R. 3962, otherwise known as the “Affordable Health Care for America Act”, the exact opposite has proven to be true.

A letter from Thomas A Barthold, Chief of Staff of the Joint Committee on Taxation, specifies clearly and repeatedly that the penalty for the non-insured is indeed a tax, with potential prosecution and jail time for those who do not comply released  The 4 page letter, sent to Rep. Dave Camp on Guy Fawkes day, was response to the Michigan Republican’s questions

Barthold explained that the bill contains a “tax on individuals without acceptable health care coverage” and added that the goal of the IRS “is consistency, fairness and predicttabilty in administration of penalties”, also pointing out that the total number of convictions the government won in tax evasion cases was 666.

“if the government determined that the taxpayer’s unpaid tax liability results from willful behavior, the following penalties could apply” Barthold explained, adding that there is a religious conscience exemption in the bill as well.

Several media outlets reported on the exchange between Obama and Stephanopoulos in September, with many covering potential jail time for non compliance. The left gatekeepers made a partisan issue out of it, but few addressed the fundamental question of  the constitutionality of universally mandated healthcare.

Following is an excerpt of the exchange between Obama and  the ABC host on THIS WEEK. Now that the facts have come out, will Obama respond?
——————————————

STEPHANOPOULOS: You were against the individual mandate…

STEPHANOPOULOS: …during the campaign. Under this mandate, the government is forcing people to spend money, fining you if you don’t .. How is that not a tax?

OBAMA: Well, hold on a second, George. Here — here’s what’s happening. You and I are both paying $900, on average — our families — in higher premiums because of uncompensated care. Now what I’ve said is that if you can’t afford health insurance, you certainly shouldn’t be punished for that. That’s just piling on.  If, on the other hand, we’re giving tax credits, we’ve set up an exchange, you are now part of a big pool, we’ve driven down the costs, we’ve done everything we can and you actually can afford health insurance, but you’ve just decided, you know what, I want to take my chances. And then you get hit by a bus and you and I have to pay for the emergency room care, that’s…

STEPHANOPOULOS: That may be, but it’s still a tax increase.

OBAMA: No. That’s not true, George. The — for us to say that you’ve got to take a responsibility to get health insurance is absolutely not a tax increase. What it’s saying is, is that we’re not going to have other people carrying your burdens for you anymore than the fact that right now everybody in America, just about, has to 446 get auto insurance. Nobody considers that a tax increase.
People say to themselves, that is a fair way to make sure that if you hit my car, that I’m not covering all the costs.

STEPHANOPOULOS: But it may be fair, it may be good public policy…

OBAMA: No, but — but, George, you — you can’t just make up that language and decide that that’s called a tax increase. Any…

OBAMA: What — what — if I — if I say that right now your premiums are going to be going up by 5 or 8 or 10 percent next year and you say well, that’s not a tax increase; but, on the other hand, if I say that I don’t want to have to pay for you not carrying coverage even after I give you tax credits that make it affordable, then…

STEPHANOPOULOS: I — I don’t think I’m making it up. Merriam Webster’s Dictionary: Tax — “a charge, usually of money, imposed by authority on persons or property for public purposes.”

OBAMA: George, the fact that you looked up Merriam’s Dictionary, the definition of tax increase, indicates to me that you’re stretching a little bit right now. Otherwise, you wouldn’t have gone to the dictionary to check on the definition. I mean what…

STEPHANOPOULOS: Well, no, but…

OBAMA: …what you’re saying is…

STEPHANOPOULOS: I wanted to check for myself. But your critics say it is a tax increase.

OBAMA: My critics say everything is a tax increase. My critics say that I’m taking over every sector of the economy. You know that. Look, we can have a legitimate debate about whether or not we’re going to have an individual mandate or not, but…

STEPHANOPOULOS: But you reject that it’s a tax increase?

OBAMA: I absolutely reject that notion.

Nobody in his/her right mind/soul cares about the color of your skin Mr. Obama.

We do care about your lies. We didn’t buy even one of your casual campaign promises. We knew that you were just another elite puppet like Bush or McCain.

The US government is pathetic, corrupt and rotten to the core. (There are a few exceptions and among them are Ron Paul, Marcy Kaptur, Dennis Kucinich and Alan Grayson.)