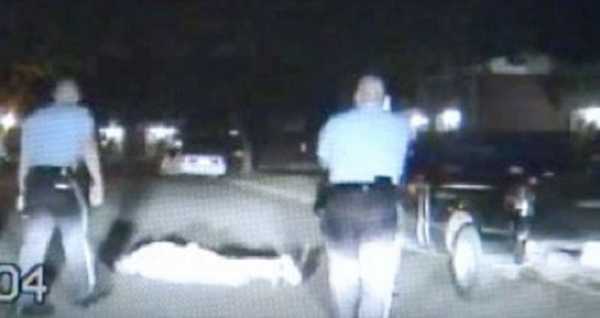 Video provided by Lansing police shows a suspect slumped on the ground after being Tasered by a police officer. (LANSING POLICE via LANSING STATE JOURNAL)

LANSING — A police officer who Tasered a man after the man had been handcuffed and subdued was suspended without pay for two weeks for violating department policies and procedures, officials said Thursday.

Lansing Police Chief Mark Alley said the incident began early Aug. 16 after police responded to a call of a dispute between Rocky Allred, 43, and a former girlfriend.

Alley said there was a scuffle between Allred and Officer Ryan Smith, a two-year veteran, and that Allred head-butted Smith while Smith tried to handcuff him.

Two other officers subdued and handcuffed Allred, Alley said, and Smith then used his Taser on Allred, causing him to fall to the ground.

According to Lansing Police Department documents, Allred had injuries to his face, including a broken jaw and chipped tooth, and required eight stitches to his chin.

After an investigation by Michigan State Police, the Ingham County Prosecutor’s Office determined there was no criminal wrongdoing, officials said.