– Study: Half of US kids will receive food stamps (USA Today):
Half of American kids will live in households receiving food stamps before age 20, according to a study reported Monday in Archives of Pediatrics & Adolescent Medicine.

– Kids on food stamps: 49% up to age 20 will be in homes that get food stamps (CNN):
A staggering half on the nation’s children will be on food stamps at some point before age 20 Joshua Levs reports.

Government programs like food stamps can’t go on forever, because the US is totally broke. Prepare yourself. 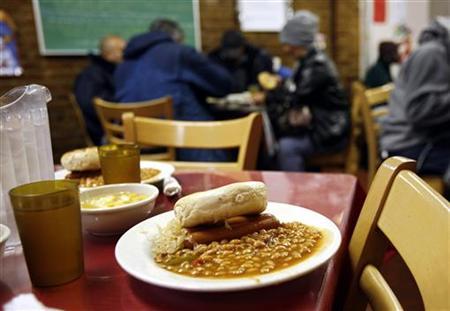 A lunch meal portion waits at the Part of the Solution (POTS) soup kitchen and food pantry in the Bronx borough of New York, in this file image from December 13, 2006. The number of Americans receiving food stamp assistance soared above 36 million for the first time in August, the eighth month in a row that enrollment set a record, the U.S. Agriculture Department said. (REUTERS)

WASHINGTON (Reuters) – The number of Americans receiving food stamp assistance soared above 36 million for the first time in August, the eighth month in a row that enrollment set a record, the U.S. Agriculture Department said on Wednesday.

The program, which helps poor people buy food, has seen enrollment jump by 4.707 million during 2009 amid a lingering economic downturn in the United States. Participation grew by 2 million people from May to August.