“US forces were participating in a civil war in Vietnam while claiming they were supporting democracy and the sovereignty of the country. In Lebanon in 1982, they claimed to be supporting the “democratically” elected President Amin Gemayel and took the Christian Maronite side in the civil war. And now, after Disneyworld elections, they are on the Karzai-government side against the Pashtun villagers of southern Afghanistan among whom the Taliban live. Where is the next My Lai? Journalists should avoid predictions. In this case I will not. Our Western mission in Afghanistan is going to end in utter disaster.”

The man who spotted Karzai’s leadership potential and recruited him to “the fold” was then RAND (the Santa Monica, California think tank, mostly conducting contract research for the Pentagon) program director, now US National Security Council member and special Bush envoy to Afghanistan, Zalmay Khalilzad. Like Karzai, Khalilzad is an ethnic Pashtun (born Mazar-i-Sharif, PhD University of Chicago). He headed Bush’s defense department transition team, and served under present US Deputy Secretary of Defense Paul Wolfowitz in the Reagan State and Bush I Defense Departments. Also like Karzai (whom Mullah Omar once asked to represent the Taliban at the UN), Khalilzad early on supported and urged engagement of the Taliban regime, only to drop such notions when the true nature of the regime became patently obvious by 1998. And one further thing both men have in common is that in 1996/97 they advised American oil company Unocal on the US$2 billion project of a Turkmenistan-Afghanistan-Pakistan pipeline. In 2000, Khalilzad invited Karzai to address a RAND seminar on Afghanistan; the same year, Karzai also testified before the US Senate Foreign Relations Committee and met periodically with Christina Rocca, then a Senate aide (to Kansas Republican Sen Sam Brownback), now the assistant secretary of state for South Asian affairs. “To us, he is still Hamid, a man we’ve dealt with for some time,” said a state department official. Such close connections to the US foreign policy, security and intelligence community lay Karzai open to the charge of being an American puppet.
Source: Asia Times

The Times on election fraud:

The head of the UN mission in Afghanistan has been accused by his former deputy of ordering a systematic cover-up to conceal the extent of electoral fraud by President Karzai.

As in Vietnam, Karzai is going to rule over an equally tiny island of corruption 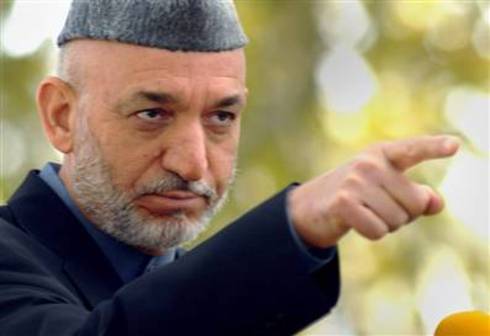 Could there be a more accurate description of the Obama-Brown message of congratulations to the fraudulently elected Hamid Karzai of Afghanistan? First the Palestinians held fair elections in 2006, voted for Hamas and were brutally punished for it – they still are – and then the Iranians held fraudulent elections in June which put back the weird Mahmoud Ahmadinejad whom everyone outside Iran (and a lot inside) regard as a dictator. But now we have the venal, corrupt, sectarian Karzai in power after a poll far more ambitiously rigged than the Iranian version, and – yup, we love him dearly and accept his totally fraudulent election.

And now we are still trying to persuade his opponent to join a national unity government, an administration led by the man whose vote-stuffing was the very reason that same leader of the opposition – the good pseudo-Pashtun Abdullah Abdullah – refused to run in a second round of elections. And Karzai got his fawning congrats from the Obama-Brown twins. So that’s OK then. Wagons Ho. For Westmoreland, read McChrystal. Send in the brave 40,000 to join the rest of the US cavalry as it fights its way west – or rather south-west – to the Khe Sanh of Afghanistan in Year Eight of the War on Terror.

The March of Folly was Barbara Tuchman’s title for her book on governments – from Troy to Vietnam-era America – that followed policies contrary to their own interests. And well may we remember the Vietnam bit. As Patrick Bury, a veteran British soldier of our current Afghan adventure, pointed out yesterday, Vietnam is all too relevant.

Back in 1967, the Americans oversaw a “democratic” election in Vietnam which gave the presidency to the corrupt ex-General Nguyen Van Thieuman. In a fraudulent election which the Americans declared to be “generally fair” – he got 38 per cent of the vote – Thieu’s opponents wouldn’t run against him because the election was a farce.

In 1967, Washington needed the elections to give legitimacy to this revolting dictator – and thus provide credibility to its own military occupation of Vietnam in the war against Communism. As in Vietnam – where Saigon was a lonely kingdom of brutal power totally isolated from the rest of the country – Karzai is going to rule over an equally tiny island of corruption, protected by US mercenaries while the Americans perform their familiar role of propping up a dictator.

As ex-Lieutenant Bury sagely points out, the Afghan war is “campaigning on a par with the 19th-century British colonial army trying to manage the unwinnable… What was or is the strategy behind these long, bloody conflicts?” Well, in 1967, it was the possible communisation of Laos, Cambodia and Thailand. Now it is Pashtunistan, Baluchistan, Waziristan. For us, the vast ignorant “plebes”, it’s supposed to stop the Taliban/al-Qa’ida beasts from attacking our looming towers all over again, albeit that the 2001 murderers in question largely hailed from that friendly, moderate, brutal, oligarchical monarchical dictatorship called Saudi Arabia where – thank the good gods – they don’t hold elections.

But it’s part of a dreary pattern. US forces were participating in a civil war in Vietnam while claiming they were supporting democracy and the sovereignty of the country. In Lebanon in 1982, they claimed to be supporting the “democratically” elected President Amin Gemayel and took the Christian Maronite side in the civil war. And now, after Disneyworld elections, they are on the Karzai-government side against the Pashtun villagers of southern Afghanistan among whom the Taliban live. Where is the next My Lai? Journalists should avoid predictions. In this case I will not. Our Western mission in Afghanistan is going to end in utter disaster.

More from Robert Fisk: The demise of the US dollar