Every family in the country is now facing a tax liability of £4,350 to prop up Britain’s banking system after Alistair Darling announced the biggest bail-out in history. 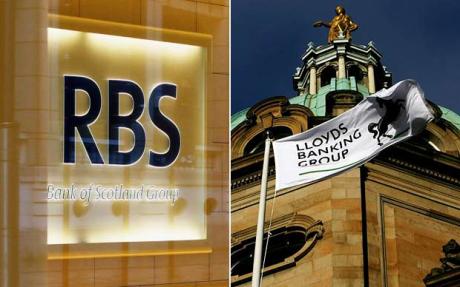 The Government is injecting a further £30bn into Lloyds and RBS.

The Chancellor confirmed that the Government would pump an extra £25.5 billion into Royal Bank of Scotland, and declared that it was the only way to keep the business alive.

Taxpayers have poured a total of £53.5 billion into RBS, including the £20 billion part-nationalisation last year and another £8 billion that was set aside as insurance against further trouble in the future.

In total, the Government has put £74 billion of taxpayers’ money into the banks, including RBS, Lloyds and HBOS, since the start of the financial crisis last year.

The Conservatives claimed the latest bail-out equated to an extra tax liability of £2,000 for every one of the 17 million families in the country. This comes on top of the £2,350 to which every household is already exposed as a result of previous attempts to prop up the financial system.

It is likely that the new bail-out will have to be funded by government borrowing, which could only be repaid through swingeing cuts to public services or substantial tax rises over the coming years. However, despite consumers picking up the bill for yet more billions for the banks, experts said that the money would still not be enough to get them to increase lending to struggling home owners and businesses.

The bail-out of RBS, which was driven to the brink of collapse in 2008 after a series of reckless investments, now ranks as the biggest in the world.

It means the Government owns 84 per cent of what was, at the peak of the finance bubble, the largest bank in the world.

In total, the British Government’s exposure to RBS now stands at more than £250 billion, because in addition to supplying funds to keep it afloat, the Government has also underwritten many of its so-called toxic assets.

The Chancellor announced the move on Tuesday as part of a package that included a further investment of £5.7 billion for Lloyds Banking Group.

The Government said the latest bail-out would pave the way for the banks to repay taxpayers’ money, as they promised to sell off branches and key businesses. So far, just £2 billion has been returned to the Treasury.

George Osborne, the shadow Chancellor, criticised the move: “Let’s not miss the elephant in the room. The government is having to put another £39.2 billion of taxpayers’ money into the banks, a bigger bail-out than the original bail-out last autumn. There is no guarantee that it will get credit flowing.”

Mr Brown said that the vast sums would be returned. “I believe at the end of the day the Government will recoup all its money from the banks, and possibly make a profit from what it has done,” he said.

“At the end of the day, banks will be paying money to the British public, not the other way round.”

Both Mr Brown and Mr Darling also heralded plans to split up RBS and Lloyds Banking Group and their parts to form a new generation of consumer-friendly banks.

The break-up is to be demanded by European regulators to ensure that the banks do not benefit unduly in the long-term from state support.

The Government has repeatedly claimed that the bail-out was a reasonable price to pay for boosting the wider economy.

Lord Myners, the City Minister, said: “If we had not stepped in to support [RBS and Lloyds], they would not be there to support small businesses.”

However, Stephen Alambritis, of the Federation of Small Businesses, said: “Small businesses are still struggling to get loans. The banks are asking for an arm and a leg and the process is tortuous and elongated.”

Michael Saunders, an economist at Citigroup, said: “We suspect that credit availability will remain relatively poor for a while.”

Vince Cable, the Liberal Democrat Treasury spokesman, said it was “simply not true” that the bail-out would save the Government money.

“Until we can split up the banks in a meaningful way, so that taxpayers will not be forced to underwrite casino activities, all banks should pay a premium for the explicit support they receive,” he said.

Under the terms of the deal announced on Tuesday, Lloyds and RBS have both agreed not to pay cash bonuses this year to any member of staff earning more than £39,000.

Lloyds also announced that it would not be taking part in the Government’s toxic asset insurance scheme despite signing up to the programme earlier this year.

Shares in RBS fell sharply after the head of the bank attacked the sell-offs ordered by European regulators.

“These disposals do not improve competition or make it any easier for us to return money to the taxpayer,” said Stephen Hester, the chief executive of RBS. “We need to return to profitability and financial strength and I don’t believe some of these disposals will help that.”

However, Mr Darling said the agreement to sell part of the banks would spur competition in the banking industry.

“I would like to see perhaps three new entrants coming onto the high street,” the Chancellor said. “We do need to be rigorous about competition. If you don’t, you do find it hard to get credit and you do find it hard to get loans at the right price.” In April, the Treasury estimated potential losses on its support for the financial system of between £20 billion and £50 billion. Mr Darling said that the estimate would be reduced in next month’s pre-budget report.

The near-collapse of RBS resulted in the resignation of Sir Fred Goodwin, its chief executive, who led its aggressive expansion into investment banking. His house in Edinburgh was attacked by protesters after it was disclosed that he had retired on an annual pension of £703,000, later reduced to £342,000.