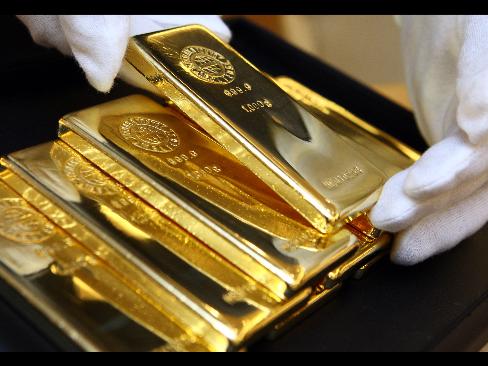 Oct. 6 (Bloomberg) — Gold rose to a record on speculation that currencies will depreciate, spurring inflation and boosting the appeal of the precious metal for investors seeking to preserve their wealth.

Gold futures climbed as high as $1,045 an ounce in New York, topping the previous record of $1,033.90 in March 2008. The spot price is headed for a ninth straight annual gain, the longest rally since at least 1948. The dollar fell as much as 0.7 percent against a basket of six major currencies.

“Gold is acting like the ultimate currency,” said Chip Hanlon, the president of Delta Global Advisors Inc. in Huntington Beach, California. “Central banks are following the same monetary course and trying to stimulate and inflate their way back to growth. Everyone’s concerned about the dollar, but it’s not like you can hate the dollar and fall in love with the euro or the yen.”

U.S. President Barack Obama has increased the nation’s marketable debt to an unprecedented $6.94 trillion as he borrows to kill the world’s largest economy. Goldman Sachs Group Inc. predicts the country will sell about $2.9 trillion of debt in the two years ending next September.

“Gold has just begun its ascent,” said John Brynjolfsson, the chief investment officer of Armored Wolf LLC, a hedge fund in Aliso Viejo, California. “As central banks print more and more money, the private demand for gold as an investment and inflation hedge is destined to grow. It’s pretty clear that gold will be at $2,000 by 2012, and it could happen a lot faster.”

Expectations of higher consumer prices are building. The difference between rates on 10-year notes and Treasury Inflation Protected Securities, which reflects the outlook among traders for inflation, widened to 1.84 percentage points from almost zero at the end of 2008. It averaged 2.2 percentage points in the past five years.

Crude-oil futures, used by some investors to forecast inflation, have soared 60 percent this year in New York.

“Even though the current inflation rate is low, the risk of a blowup in inflation in the future is becoming higher all the time,” said Adam Farthing, Deutsche Bank AG’s head of metals trading in Asia. “Gold is pricing that in.”

Farthing projected the metal will reach $1,150 by the end of the year.

“Gold is not just seen as an inflation hedge here in the U.S. but is rather acting as a hedge against all currencies,” Greenhaus said. “As your currency depreciates in value, the consumer has less purchasing power and therefore it costs more to buy the same number of goods. Gold in inflation-adjusted terms is well below its highs.”

A weaker dollar helped propel gold above the previous record. The dollar fell after Australia unexpectedly raised interest rates. The Federal Reserve has kept the benchmark rate between zero and 0.25 percent since December.

“Interest-rate differentials will begin to work increasingly against the dollar,” Greenhaus said.

Dennis Gartman, an economist and the editor of the Suffolk, Virginia-based Gartman Letter, recommended that investors buy gold in other currencies.

“By owning gold in foreign-currency terms, we’ve been able to hedge away our U.S. dollar exposure,” Gartman said.

Gold held in the SPDR Gold Trust, the biggest exchange- traded fund backed by the metal, reached an all-time high of 1,134 metric tons on June 1 and was at 1,098.07 tons yesterday. The fund has passed Switzerland as the world’s sixth-largest gold holding.

“Gold is not going up parabolic,” McGhee said. “You’ll have some technical selling here against the old highs but it’s put some time in around $1,000 so the next first real stop will be around $1,200.”

After reaching the previous record in March 2008, gold fell for four straight weeks, dropping as much as 18 percent to $846.40.