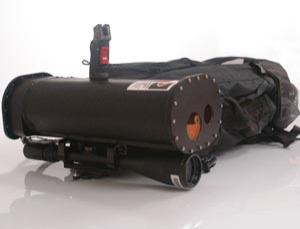 The Pentagon’s efforts to develop a beam weapon that can deter an adversary by causing a burning sensation on their skin has taken a step forward with the development of a small, potentially hand-held, version. The weapon, which is claimed to cause no permanent harm, could also end up being used by police to control civilians. 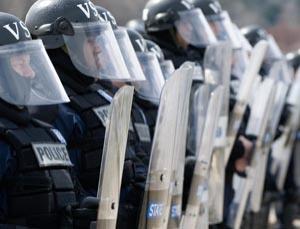 The idea of the weapon is to “create a heating sensation that repels individual adversaries”, according to the Joint Non-Lethal Weapons Directorate (JNLWD) in Quantico, Virginia, which develops less-lethal weapons for the US military and coastguard.

Tests with a rifle-mounted infrared laser, carried out at a US air force lab near Dayton, Ohio, have determined a combination of laser pulse power and wavelength that causes an alarming, hot sensation on the skin, but which stops short of causing a burn, says JNLWD project engineer Wesley Burgei.

“We have established the minimum irradiance to cause a sensation and have characterised where thermal injury begins,” he says. “But the exact operating irradiance which balances a useful military effect with a conservative margin of safety has not been nailed down yet.”

That’s something that will have to be done before the weapon is deployed, as too powerful a laser beam could permanently blind someone if fired at their eyes. Weapons that do this are banned under the UN Protocol on Blinding Laser Weapons.

Burgei says it is possible to create a beam that will affect the skin without damaging the cornea, and do so at a wavelength that does not penetrate to the retina “and would therefore be retina safe”.

The JNLWD says that tests at the Air Force Research Laboratory’s human effectiveness lab have established that the skin heating effect causes no permanent damage – suggesting it may have “military utility”. The tests also highlighted areas in need of improvement before troops can use it, says lab manager Semih Kumru – though what those features are has not been revealed.

The proposed system is rifle mounted, with a sight above it and a visible low-power laser beam that the soldier uses to aim the invisible infrared laser. The solid-state laser system is battery-powered, and could become hand-held “in the near future”, Burgei says.

The weapon, which has been evolving since 2005, is officially known at the Pentagon as the Thermal Laser System. The US National Institute of Justice, which is also funding the weapon’s development in the hope that it may prove useful for the police, refers to it as the IR-Lesslethal device.

The Pentagon already has a large crowd control weapon called the Active Denial System that can heat whole groups of people, causing them to flee. It uses a flat-plate antenna mounted on a truck or aircraft to aim a 2-metre-wide microwave beam at the crowd.

Like all supposedly non-lethal weapons that could be used to control civilians, the Pentagon’s new portable weapon is raising concerns. “I’d like to know why they want another advanced pain compliance weapon like this,” says Steve Wright, non-lethal weapons analyst at Leeds Metropolitan University in the UK. “Persuading by pain rather than brain – through conversation – has led to push-button torture in the past. If it leaves no mark on the skin how will anyone prove it’s been abused?”