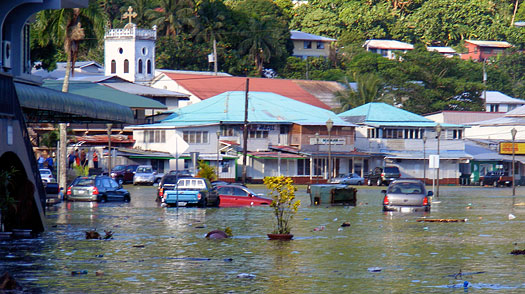 Tsunami awareness is relatively high in this earthquake-prone part of the world, particularly after the devastating earthquake and tsunami on Dec. 26, 2004, that killed 227,898 people around the Indian Ocean, according to the United States Geological Survey. Even so, Filipo Ilaoa, deputy director of the American Samoan office in Honolulu, said that the tsunami struck the coast of American Samoa in “a matter of minutes” after the quake, and that many residents would not have had much time to run for higher ground.

“American Samoa is a small island, and most of the residents are around the coastline,” he said. “There was no warning or anything at all. By the time the alert was out of the Pacific Tsunami Warning Center, it had already hit.”

Both islands are just east of the international date line, which is why it was early Tuesday morning when the quake occurred, but it was already early Wednesday in Japan, China and Australia.

On Samoa, there were reports of at least a dozen casualties. Russell Hunter, the managing editor of The Samoa Observer newspaper in Vaitele, outside the capital, Apia, said his reporters had received word that at least 17 people on the island had been killed. Samoa’s police office did not respond to telephone calls, and phone lines on much of the island were cut or jammed.

“There is extensive damage in the southeast part of the island,” Mr. Hunter said. “It seems to be mostly in the rural villages,” which he said were mostly clustered along the coast and whose houses were generally made of light materials, including wood.

Many residents told local reporters of flattened houses and cars that were swept into neighboring towns. Graeme Ansell, a New Zealand tourist who was at Faofao Beach Fales on the southeast coast of Upolu Island, told Radio New Zealand that the village had been decimated. He said he and others had clambered up a nearby hill to safety.