The UK is broke and the pound is – thanks to the government and the Bank of England – worthless paper.

“A weak currency arises from a weak economy, which in turn is the result of a weak government.” – Gordon Brown 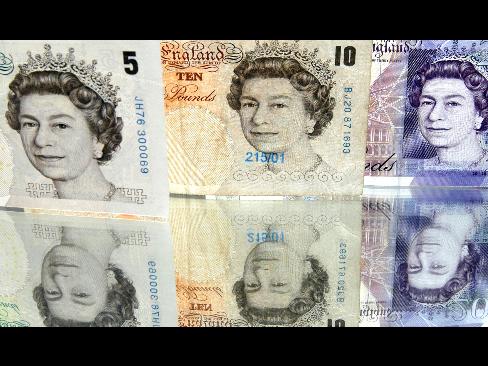 Sept. 24 (Bloomberg) — The pound fell, weakening to 91 pence per euro for the first time in more than five months, on speculation the Bank of England favors currency declines to boost the economy.

The pound also dropped the most since April against the dollar on renewed investor expectations that the central bank will cut the rate it pays financial institutions on deposits. Bank of England Governor Mervyn King said the weakening pound is “helpful” in rebalancing the economy, the Newcastle Journal cited him as saying in an interview. Prime Minister Gordon Brown told reporters in New York today he welcomes “all the factors that make for a stable economy.”

“A currency, which the country’s own central bank likes to see weak, obviously is not an attractive investment,” Commerzbank analysts including Lutz Karpowitz in Frankfurt wrote in a research note today. “If King keeps digging then he is clearly signaling that he does not care about this loss of trust.”

Sterling also fell after the Daily Telegraph said policy makers called economists to a “crisis meeting” next week to discuss the pound’s decline and the central bank’s so-called quantitative-easing program. A spokesman for the bank told Bloomberg today no such meeting had been called.

“The press reports regarding the economists’ meeting next week could be indicating that issues such as the deposit-rate cut, which was mooted by King last week but wasn’t mentioned in the minutes yesterday, are back on the table,” said Jeremy Stretch, a senior currency strategist at Rabobank International in London. The market is “putting two and two together and seeing the plumbing or the pipes of the U.K. financial system are still a little gummed up.”

King told lawmakers in London last week that policy makers were considering cutting the rate paid to financial institutions on deposits. The rate is currently 0.5 percent.

The Bank of England may still loosen its policy further and begin withdrawing excess liquidity from the U.K. financial system in the third quarter of next year, according to UBS AG.

‘Give Growth a Chance’

“Our economists continue to expect a 25 billion-pound increase as a part of a phased easing in the quantitative- easing program,” Brian Kim, a Washington-based currency strategist at UBS, wrote in a report yesterday. “The committee in our view believes the risks to policymaking are very much asymmetric and will therefore remain in a ‘give-growth-a- chance’ mode.”

Sterling lost almost 7 percent against the euro since June, after climbing 12 percent in the first half. BNP Paribas said last week the pound may reach parity with the euro in the first quarter. Citigroup said on Sept.21 it would “exceed” parity.

The Bank of England agreed on Aug. 6 to expand by 50 billion pounds ($81 billion) the asset-purchase program to lower borrowing costs and pull the economy out of its deepest recession since World War II. The current plan stands at 175 billion pounds.

Bank of England Chief Economist Spencer Dale said today he favored limiting the increase in the bank’s bond purchase plan to 175 billion pounds because of the risk spending more “might result in unwarranted increases in some asset prices’’.

To contact the reporter on this story: Morwenna Coniam in London at mconiam@bloomberg.net