“This is the worst thing that one can imagine,” Medvedev said. “What would happen afterwards? A humanitarian catastrophe, a huge number of refugees. And Iran would want revenge, and not only over Israel, but over other countries as well. The events in the region would become completely unpredictable. I think the scope of such a disaster would not be comparable to anything. Therefore, before taking the decision to launch any attacks, you need to think the situation through. It would be the most irrational way to deal with the situation. But my Israeli colleagues told me they do not plan to do that. And I trust them.’

“Brzezinski plays no role in the Obama administration ….”

Brzezinski is the man behind Obama reporting to the elite.

Brzezinski is the partner of David Rockefeller.

Together they created the TriLateral Commission in 1973. Intellectual representative of 300 of the wealthiest people in the world. Strong influence on US policies, foreign and domestic.

“We are on the verge of a global transformation. All we need is ”the right major crisis” and the nations will accept the New World Order.” – David Rockefeller

Brzezinski is Obama’s “right-hand man.” (He’s his fucking “Dick Cheney” if you need it spelt out for you in “Bush” language.). 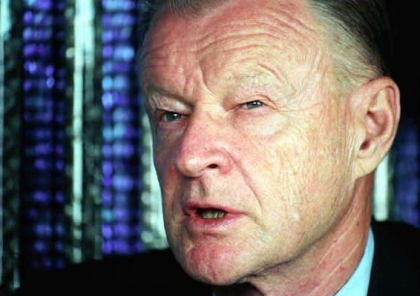 The national security adviser for former President Jimmy Carter, Zbigniew Brzezinski, gave an interview to The Daily Beast in which he suggested President Obama should make it clear to Israel that if they attempt to attack Iran’s nuclear weapons sites the U.S. Air Force will stop them.

“We are not exactly impotent little babies,” Brzezinski said. “They have to fly over our airspace in Iraq. Are we just going to sit there and watch? … We have to be serious about denying them that right. That means a denial where you aren’t just saying it. If they fly over, you go up and confront them. They have the choice of turning back or not. No one wishes for this but it could be a ‘Liberty’ in reverse.”

The USS Liberty was a U.S. Navy technical research ship that the Israeli Air Force mistakenly attacked during the Six Day War in 1967.

MISTAKENLY???:
– Dead In The Water – The Sinking of the USS Liberty (BBC Documentary)

Brzezinski endorsed then-Sen. Obama’s presidential campaign in August 2007, which at the time was portrayed in the media as a boost to Obama’s foreign policy cred. The Washington Post reported: “Barack Obama, combating the perception that he is too young and inexperienced to handle a dangerous world, got a boost yesterday from a paragon of foreign policy eminence, Zbigniew Brzezinski.”

Brzezinski was never an official campaign adviser, but Republicans jumped on the endorsement to push the meme that Obama wouldn’t be a friend to Israel, as Brzezinski’s views of Israel attracted criticism from some quarters in the American Jewish community.

“Brzezinski is not an adviser to the campaign,” former Ambassador Dennis Ross, then a senior adviser on Middle East affairs to the Obama campaign, said at the time. “There is a lot of disinformation that is being pushed, but he is not an adviser to the campaign. Brzezinski came out and supported Obama early because of the war in Iraq. A year or so ago they talked a couple of times. That’s the extent of it, and Sen. Obama has made it clear that on other Middle Eastern issues, Brzezinski is not who he looks to. They don’t have the same views.”

Brzezinski plays no role in the Obama administration; the White House did not immediately respond to a request for comment.

Brzezinski’s comments come within the same week that the White House distanced itself from comments made by former President Carter, who said he thinks “an overwhelming portion of the intensely demonstrated animosity toward President Barack Obama is based on the fact that he is a black man.”

2 thoughts on “Zbigniew Brzezinski: Obama Administration Should Tell Israel US Will Attack Israeli Jets if They Try to Attack Iran”