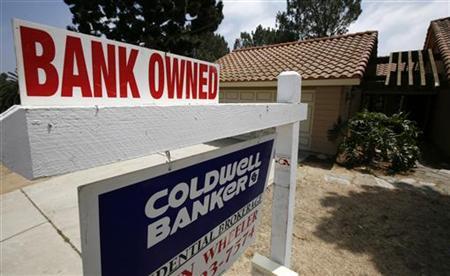 A bank owned home is advertised for sale in Encinitas, California August 18, 2009. (REUTERS)

WASHINGTON (Reuters) – Only 12 percent of U.S. homeowners eligible for loan modifications under the Obama administration’s housing rescue plan have had their mortgages reworked, and millions more foreclosures are coming, the Treasury Department said on Wednesday.

A Treasury report showed 360,165 people had their monthly payments reduced through August, up from 235,247 through July, but a senior Treasury official conceded much more must be done to soften the impact of a severe and prolonged housing crisis.

“The recent crisis in the housing sector has devastated families and communities across the country and is at the center of our financial crisis and economic downturn,” Michael Barr, assistant Treasury secretary for financial institutions, told a House Financial Services subcommittee.

Treasury has begun releasing monthly reports on the loan modification program, called the Home Affordable Modification Program, or HAMP, that it launched in February. At the time, it was suggested that millions of Americans might be able to get some relief through negotiations with their mortgage lenders.

But the program, which pays cash incentives to mortgage servicers to reduce monthly payments to 31 percent of a borrower’s income, is off to a relatively slow start.

In July, Treasury said that just 9 percent of the estimated number of homeowners eligible had had their payments reduced, so August’s 12 percent total represents only modest progress.

Barr said that Treasury was on track to achieve 500,000 trial modifications by November 1. The modification becomes permanent once a borrower makes three reduced monthly payments.

Barr said that “even if HAMP is a total success, we should still expect millions of foreclosures” as administration and industry efforts continue to stabilize a crisis-stricken housing sector.

“I am disappointed at the pace of this program,” said Rep. Barney Frank, chairman of the Financial Services Committee.

The House last year passed a cram-down bill but it was defeated in the Senate, which at the time had a narrower Democratic majority.

“The best lobbyists we have for getting bankruptcy legislation passed are the servicers who are not doing a very good job of modifying mortgages,” said Frank. “If they do not improve their performance, then they improve the chances of that legislation.”

Barr said President Barack Obama supports the idea of allowing bankruptcy judges to alter mortgage terms, but “the first and best answer has got to be ‘let’s figure out a way of keeping people in their home with a modification’ and that’s where we’re focused.”

A Federal Reserve economist, however, said that an effective plan to mitigate foreclosures must deal with rising unemployed borrowers.

“Thirty one percent of an unemployed person’s income is often nothing. And a payment of zero will never be attractive to a lender,” Boston Federal Reserve Bank senior economist Paul Willen told the hearing.

Treasury said that 47 loan servicers have signed up for the loan modification program initiated by Treasury. But the Treasury report showed 21 had modified less than 5 percent of eligible troubled loans and several had not modified any.

The lender with the highest percentage of eligible loans modified was Saxon Mortgage Services Inc., at 39 percent. Bank of America, one of the largest U.S. mortgage lenders and servicers, had modified just 7 percent of loans eligible for the program.

Barr said a strong housing market was “crucial” to a sustained U.S. economic recovery and noted that analysts say

more than six million Americans are at risk of foreclosure in the next three years.

“Much more remains to be done and we will continue to work with other agencies, regulators and the private sector to reach as many families as possible,” Barr said.

1 thought on “US Treasury: Millions more foreclosures are coming”