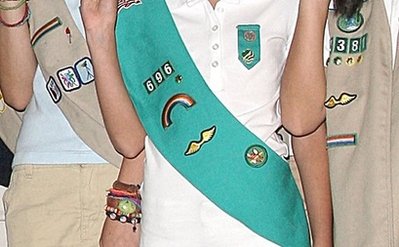 Girl scouts display various badges. The United States wants to enlist its 3.4 million Girl Scouts in the effort to combat hurricanes, pandemics, terror attacks and other disasters. The Department of Homeland Security (DHS) launched a campaign Tuesday to entice the blue, brown and green-clad multitudes to be even more prepared, with the promise of a new patch if they pitch in. (AFP/Getty Images/File/Jason Merritt)

WASHINGTON (AFP) – The United States wants to enlist its 3.4 million Girl Scouts in the effort to combat hurricanes, pandemics, terror attacks and other disasters.

The Department of Homeland Security (DHS) launched a campaign Tuesday to entice the blue, brown and green-clad multitudes to be even more prepared, with the promise of a new patch if they pitch in.

The young scouts will be able to emblazon their sashes or vests with the patch if they undergo the training which readies them for an emergency.

“This new preparedness patch will increase citizen preparedness and enhance our country’s readiness for disasters,” said DHS Secretary Janet Napolitano in a statement.

“As a former Girl Scout, I know the ‘Be Prepared’ motto well, and I look forward to working with the Girl Scouts to spread the preparedness message to all of our nation’s citizens.”

The move is part of a month-long government effort to make Americans better able to cope with natural and man-made disasters.

Napolitano has urged individuals, families and businesses to stock fresh water and food, and prepare an emergency plan — to be enacted in the event of a disaster.

The unveiling of the patch marks a partnership between the scouts and Citizen Corps, a community-based initiative under the DHS’s Federal Emergency Management Agency, which coordinates national response to disasters.

Girl Scouts of the USA chief executive Kathy Cloninger said the tie up with Citizen Corps “provides an opportunity for our girls to lead the way in ensuring that their families and their communities are prepared for emergencies.”

The patch will be available alongside existing Girls Are Great, Girl Scouts Against Smoking, Media Know-How and Read to Lead patches, and, of course, the Cookie Sale Activity Pin.

Girl Scouts sell an astonishing 200 million boxes of cookies each year on average, according to the organization, which was founded in 1912 and chartered by the US Congress in 1950.

It is not the first time the girl guides have been called into action in defense of the homeland.

As the end of the second millennium neared and computers around the world were expected to be stricken with a debilitating bug, Girl Scouts were enlisted in some parts of the country to hand out advice about the threat poised by Y2K.