On Monday the Fed announced it had purchased another $7 billion worth of Treasuries under its quantitative easing program.  Readers will recall that in last week’s FOMC statement, the Fed said it was extending the Treasury purchase program by a month, to the end of October, while maintaining its total purchase commitment of $300 billion.

After today’s $7 billion purchase, the Fed has just $40 billion left.  Spread out over the next 10 weeks, that doesn’t give it very much ammo.  To date, purchases have averaged over $12 billion per week.  That is set to fall to $4 billion.

Because I’m a glutton for this stuff, I thought I’d put together a quick chart showing the progress of the Fed’s Treasury purchase program. 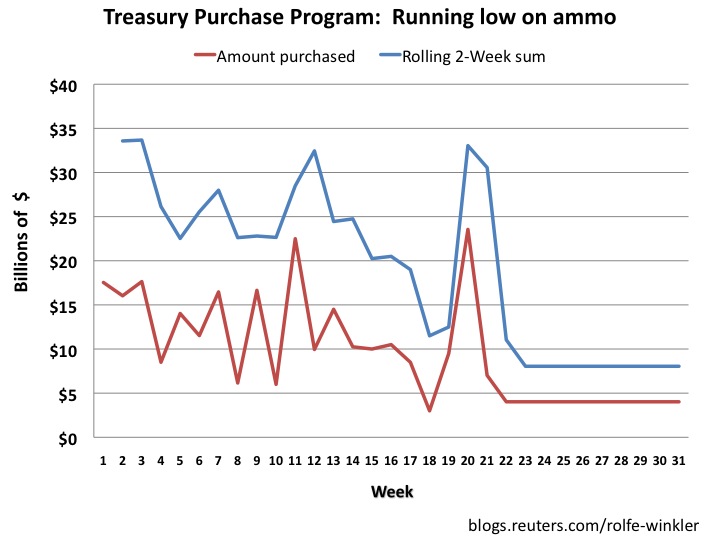 From the first purchase of Treasuries on March 25th through the end of October, the program will have lasted just over 31 weeks.  The chart above plots total purchases by week (red line) and the rolling 2-week sum of purchases (blue line).  The variability of the Fed’s purchases is a little less pronounced when measured every two weeks as opposed to every week, which is why I included the blue line.

Anyway, you can see that the Fed will indeed be putting on the brakes.  Assuming, of course, that Bernanke doesn’t change his mind about stopping at $300 billion….