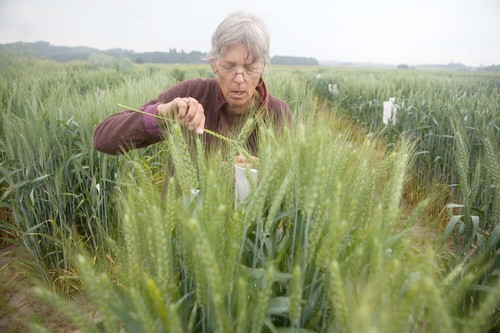 Though most Americans have never heard of it, Ug99 — a type of fungus called stem rust because it produces reddish-brown flakes on plant stalks — is the No. 1 threat to the world’s most widely grown crop.

The International Maize and Wheat Improvement Center in Mexico estimates that 19% of the world’s wheat, which provides food for 1 billion people in Asia and Africa, is in imminent danger. American plant breeders say $10 billion worth of wheat would be destroyed if the fungus suddenly made its way to U.S. fields.

Fear that the fungus will cause widespread damage has caused short-term price spikes on world wheat markets. Famine has been averted thus far, but experts say it’s only a matter of time.

“A significant humanitarian crisis is inevitable,” said Rick Ward, the coordinator of the Durable Rust Resistance in Wheat project at Cornell University in Ithaca, N.Y.

The solution is to develop new wheat varieties that are immune to Ug99. That’s much easier said than done.

After several years of feverish work, scientists have identified a mere half-dozen genes that are immediately useful for protecting wheat from Ug99. Incorporating them into crops using conventional breeding techniques is a nine- to 12-year process that has only just begun. And that process will have to be repeated for each of the thousands of wheat varieties that is specially adapted to a particular region and climate.

“All the seed needs to change in the next few years,” said Ronnie Coffman, a plant breeder who heads the Durable Rust Resistance in Wheat project. “It’s really an enormous undertaking.”

Farmers have been battling stem rust for as long as they have grown wheat. The fungus’ ancestors infected wild grasses for millions of years before people began cultivating them for food, said Jorge Dubcovsky, professor of genetics and plant breeding at UC Davis.

“The pathogen keeps mutating and evolving,” he said. “It’s one of our biblical pests. This is not a small enemy.”

When a spore lands on a green wheat plant, it forms a pustule that invades the outer layers of the stalk. The pustule hijacks the plant’s water and nutrients and diverts them to produce new rust spores instead of grain. Within two weeks of an initial attack, there can be millions of pustules in a 2.5-acre patch of land.

Wheat plants that can recognize a specific chemical produced by stem rust can mount a defense against the fungus. But the rust is able to mutate, evade the plant’s immune system and resume its spread.

Stem rust destroyed more than 20% of U.S. wheat crops several times between 1917 and 1935, and losses reached nearly 9% twice in the 1950s. The last major outbreak, in 1962, destroyed 5.2% of the U.S. crop, according to Peterson, who chairs the National Wheat Improvement Committee.

The fungus was kept at bay for years by breeders who slowly and methodically incorporated different combinations of six major stem rust resistance genes into various varieties of wheat. The breeders thought it unlikely that the rust could overcome clusters of those genes at the same time.

After several outbreak-free decades, it seemed that stem rust had been defeated for good. Scientists switched to other topics, and the hunt for new resistance genes practically slowed to a crawl.

A new strain of stem rust was identified on a wheat farm in Uganda in 1999.

East Africa is a natural hot spot for stem rust. Weather conditions allow farmers to grow wheat year-round, so rust spores can always find a susceptible host. Some of the wheat is grown as high as 7,000 feet above sea level, where intense solar radiation helps the fungus mutate.

The highlands are also home to barberry bushes, the only plant on which stem rust is known to reproduce through sexual recombination. That genetic shuffling provides a golden opportunity for the fungus to evolve into a deadly strain.

Within a few years, Ug99 — named for the country and year it was identified — had devastated farms in neighboring Kenya, where much of the wheat is grown on large-scale farms that have so far been able to absorb the blow. Then it moved north to Ethiopia, Sudan and Yemen, putting more small farms at risk. Those that can afford it are trying to make do with fungicides, but that’s too cumbersome and expensive to be a long-term solution, Ward said.

To make matters worse, the fungus is becoming more virulent as it spreads. Scientists discovered a Ug99 variant in 2006 that can defeat Sr24, a resistance gene that protects Great Plains wheat.

Last year, another variant was found with immunity to Sr36, a gene that safeguards Eastern wheat.

Should those variants make their way to U.S. fields any time soon, scientists would be hard-pressed to protect American wheat crops.

Now the pressure is on to develop new wheat varieties that are impervious to Ug99. Hundreds of varieties will need to be upgraded in the U.S. alone.

“You can’t just breed it into one or two major varieties and expect to solve the problem,” Peterson said. “You have to reinvent this wheel at almost a local level.”

The first step is to identify Ug99 resistance genes by finding wheat plants that can withstand the deadly fungus.

Roughly 16,000 wheat varieties and other plants have been tested in the cereal disease lab over the last four years. The tests were conducted between Dec. 1 and the end of February, when the Minnesota weather is so frigid that escaping spores would quickly perish, Carson said.

These and similar efforts at a research station in Kenya have turned up only a handful of promising resistance genes, which crop breeders such as Brett Carver at Oklahoma State University in Stillwater are trying to import into vulnerable strains of wheat.

Each year, Carver crosses hundreds of plants in a greenhouse to produce as many as 50,000 candidate strains. Over the next four years, those are winnowed down, and the most promising 2,000 are planted in the field.

Only the hardiest strains are replanted each year, until the 12-year process results in a single new variety with dozens of valuable traits, such as the ability to withstand drought and make fluffy bread.

The oldest of the plants Carver bred for Ug99 resistance are only 3 years old, but one of the strains has been planted in the field already in case the fungus hitches a quick ride to the U.S. on an airplane or in a shipping container.