The travel plans and personal details of every holidaymaker, business traveller and day-tripper who leaves Britain are to be tracked by the Government, the Daily Telegraph can disclose. 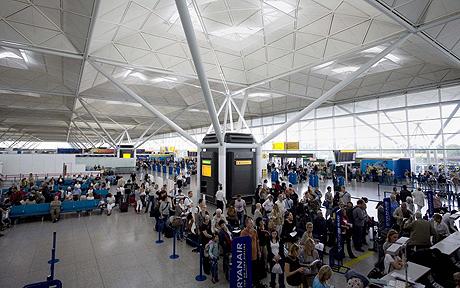 Anyone departing the UK by land, sea or air will have their trip recorded and stored on a database for a decade.

Passengers leaving every international sea port, station or airport will have to supply detailed personal information as well as their travel plans. So-called “booze crusiers” who cross the Channel for a couple of hours to stock up on wine, beer and cigarettes will be subject to the rules.

In addition, weekend sailors and sea fishermen will be caught by the system if they plan to travel to another country – or face the possibility of criminal prosecution.

The owners of light aircraft will also be brought under the system, known as e-borders, which will eventually track 250 million journeys annually.

Even swimmers attempting to cross the Channel and their support teams will be subject to the rules which will require the provision of travellers’ personal information such as passport and credit card details, home and email addresses and exact travel plans.

The full extent of the impact of the government’s “e-borders” scheme emerged amid warnings that passengers face increased congestion as air, rail and ferry companies introduce some of the changes over the Easter holidays.

The new checks are being introduced piecemeal by the UK Border Agency. By the end of the year 60 per cent of journeys made out of Britain will be affected with 95 per cent of people leaving the country being subject to the plans by the end 2010.

Yachtsmen, leisure boaters, trawlermen and private pilots will be given until 2014 to comply with the programme.

They will be expected to use the internet to send their details each time they leave the country and would face a fine of up to £5,000 should they fail to do so.

Similar penalties will be enforced on airlines, train and ship operators if they fail to provide details of every passenger to the UK Border Agency.

In most cases the information will be expected to be provided 24 hours ahead of travel and will then be stored on a Government database for around ten years.

The changes are being brought in as the Government tries to tighten border controls and increase protection against the threat of international terrorism.

Currently passports are not checked as a matter of routine when people leave the country.

Exit controls for departure to other countries within the European Union were scrapped by the last Conservative Government. The rest were scrapped by Jack Straw, when he became Home Secretary, after Labour won the election in 1997.

However, passport inspections at ports have gradually been reintroduced as the Government looks to prevent anyone on a Government watchlist fleeing the country.

Gwyn Prosser, Labour MP for Dover and a member of the all-party Home Affairs Select Committee, said: “I think e-borders are absolutely necessary,” he said. “Governments of all complexions have always been criticised for not knowing who is in the country. This is a very sophisticated way of counting people in and out.”

Britain is not the only country to require such information from travel operators. The USA also demands the same information be supplied from passengers wishing to visit America.

But the scale of the scheme has alarmed civil liberties campaigners.

“Your travel data is much more sensitive than you might think,” Phil Booth of the privacy group, NO2ID said.

“Given that for obvious reasons we’re encouraged not to put our home address on our luggage labels, and especially given the Government’s appalling record on looking after our data, it just doesn’t seem sensible for it to pass details like this and sensitive financial information around.”

“It is a sad refection of the times that the dream of freedom of movement across Europe has had to take second place to concerns about national security,” said Edmund King, the AA’s president.

“Travellers will need to ensure that their passports are up to date and that details are input accurately if they don’t want to end up in a dark room being grilled by border officials.”

Ferry firms and Eurostar – who, unlike airlines, do not gather such detailed passenger information – have also raised concerns about the impact on passengers and warned the plans may not even be legal under EU law.

The changes would mean that Eurostar, Eurotunnel and ferry companies will now have to demand passport details from passengers at the time of booking, along with the credit card information and email address which they would have taken at the time of the reservation.

“We are also concerned that the implementation of e-borders could prove expensive and time consuming. For passengers this could mean longer check-in times,” a Eurostar spokesman said.

“This will lead to unwelcome queues of vehicles at ferry ports and risks adding unnecessary complications to what always have been and ought to be a simple and straightforward journey,” said a spokesman for the Chamber of Shipping.

In particular the Chamber is worried by proposals to include the Republic of Ireland in the e-borders scheme.

“E-borders is a system to carry passport data and at the moment passengers don’t need one to cross the Irish Sea.”

The plans have also alarmed the Royal Yachting Association. “From a recreational leisure boating point of view, filling in paper work detailing your exact travel plans every time you cross a border is not desirable.,” a spokesman said.

The scheme was condemned by Chris Grayling, the Tories’ home affairs spokesman.

“Of course we need to keep a proper record of people as they come in and leave the country.

“My worry is that the Government is creating something which will be unwieldy, impossible to manage and expensive to operate.

“I think this system has to be much simpler.”

A UK Border Agency spokesman defended the e-borders scheme. “It allows us to secure the UK’s Borders by screening people as they travel in and out of the UK.

“The e-Borders scheme has already screened over 82m passengers travelling to Britain, leading to more than 2,900 arrests, for crimes including murder, drug dealing and sex offences. e-borders helps the police catch criminals attempt to escape justice.”