The minds of world leaders are firmly shut to anything but the fantasies of the scaremongers. 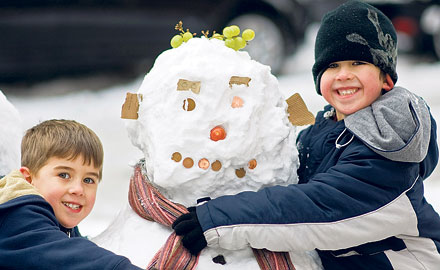 Cold comfort: If the present trend continues, the world will be 1.1C cooler in 2100 Photo: Getty

Considering how the fear of global warming is inspiring the world’s politicians to put forward the most costly and economically damaging package of measures ever imposed on mankind, it is obviously important that we can trust the basis on which all this is being proposed. Last week two international conferences addressed this issue and the contrast between them could not have been starker.

The first in Copenhagen, billed as “an emergency summit on climate change” and attracting acres of worldwide media coverage, was explicitly designed to stoke up the fear of global warming to an unprecedented pitch. As one of the organisers put it, “this is not a regular scientific conference: this is a deliberate attempt to influence policy”.

What worries them are all the signs that when the world’s politicians converge on Copenhagen in December to discuss a successor to the Kyoto Protocol, under the guidance of the UN Intergovernmental Panel on Climate Change (IPCC), there will be so much disagreement that they may not get the much more drastic measures to cut carbon emissions that the alarmists are calling for.

Thus the name of the game last week, as we see from a sample of quotations, was to win headlines by claiming that everything is far worse than previously supposed. Sea level rises by 2100 could be “much greater than the 59cm predicted by the last IPCC report”. Global warming could kill off 85 per cent of the Amazon rainforest, “much more than previously predicted”. The ice caps in Greenland and Antarctica are melting “much faster than predicted”. The number of people dying from heat could be “twice as many as previously predicted”.

None of the government-funded scientists making these claims were particularly distinguished, but they succeeded in their object, as the media cheerfully recycled all this wild scaremongering without bothering to check the scientific facts.

What a striking contrast this was to the second conference, which I attended with 700 others in New York, organised by the Heartland Institute under the title Global Warming: Was It Ever Really A Crisis?. In Britain this received no coverage at all, apart from a sneering mention by the Guardian, although it was addressed by dozens of expert scientists, not a few of world rank, who for professional standing put those in Copenhagen in the shade.

Led off with stirring speeches from the Czech President Vaclav Klaus, the acting head of the European Union, and Professor Richard Lindzen of MIT, perhaps the most distinguished climatologist in the world, the message of this gathering was that the scare over global warming has been deliberately stoked up for political reasons and has long since parted company with proper scientific evidence.

Nothing has more acutely demonstrated this than the reliance of the IPCC on computer models to predict what is going to happen to global temperatures over the next 100 years. On these predictions, that temperatures are likely to rise by up to 5.3C, all their other predictions and recommendations depend, yet nearly 10 years into the 21st century it is already painfully clear that the computer forecasts are going hopelessly astray. Far from rising with CO2, as the models are programmed to predict they should, the satellite-measured temperature curve has flattened out and then dropped. If the present trend were to continue, the world in 2100 would not in fact be hotter but 1.1C cooler than the 1979-1998 average.

Yet it is on this fundamental inability of the computer models to predict what has already happened that all else hangs. For two days in New York we heard distinguished experts, such as Professor Syun-Ichi Akasofu, former director of the International Arctic Research Center, Dr Willie Soon of the Harvard-Smithsonian Center for Astrophysics and Professor Paul Reiter of the Pasteur Institute, authoritatively (and often wittily) tear apart one piece of the scare orthodoxy after another.

Sea levels are not shooting up but only continuing their modest 3mm a year rise over the past 200 years. The vast Antarctic ice-sheet is not melting, except in one tiny corner, the Antarctic Peninsula. Tropical hurricane activity, far from increasing, is at its lowest level for 30 years. The best correlation for temperature fluctuations is not CO2 but the magnetic activity of the sun. (For an admirable summary of proceedings by the Australian paleoclimatologist Professor Bob Carter, Google “Heartland” and “Quadrant”).

Yet the terrifying thing, as President Klaus observed in his magisterial opening address, is that there is no dialogue on these issues. When recently at the World Economic Forum in Davos, he found the minds of his fellow world leaders firmly shut to anything but the fantasies of the scaremongers. As I said in my own modest contribution to the conference, there seems little doubt that global warming is leading the world towards an unprecedented catastrophe. But it is not the Technicolor apocalypse promised by the likes of Al Gore. The real disaster hanging over us lies in all those astronomically costly measures proposed by politicians, to meet a crisis which in reality never existed.

On my first visit to New York 45 years ago I was stunned by its scale and modernity. Not having been there since, it was a shock to see how tatty and dated the city now seems. When I went up the Empire State Building (now 80 years old) with my son Nick, we were struck by how small the city looks, and how soon it gives way to countryside and sea.

I recalled Scott Fitzgerald’s essay My Lost City, describing how he returned two years after the Wall Street Crash to see the “last and most magnificent of towers” rising “from the ruins”. Going up it, he “discovered the crowning error of the city, its Pandora’s Box. Full of vaunting pride, the New Yorker had climbed here and seen with dismay what he had never suspected. That the city was not the endless succession of canyons that he had supposed, but that it had limits. From the tallest structure he saw for the first time that it faded out into the country on all sides, into an expanse of blue and green that was limitless”. New York “was a city after all and not a universe”. “The whole shining edifice he had reared in his imagination came crashing to the ground”. As Nick, who works in India, observed, “New York is a museum to the 20th century”. But it was still a pleasure to visit.