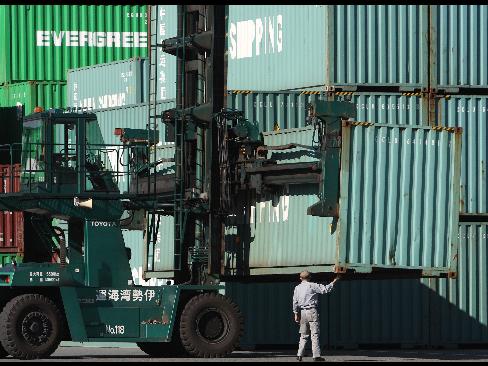 A worker checks on a China Shipping Container Lines Co. container as it unloaded at a port in Tokyo, Nov. 20, 2008. Photographer: Tomohiro Ohsumi/Bloomberg News

Feb. 25 (Bloomberg) — Japan’s exports plunged 45.7 percent in January from a year earlier, resulting in a record trade deficit, as recessions in the U.S. and Europe smothered demand for the country’s cars and electronics.

The shortfall widened to 952.6 billion yen ($9.9 billion), the biggest since 1980, the earliest year for which there is comparable data, the Finance Ministry said today in Tokyo. The drop in shipments abroad eclipsed a record 35 percent decline set the previous month.

Exports to the U.S. tumbled an unprecedented 52.9 percent from a year earlier, and shipments to Asia and Europe also posted the largest-ever declines as the global recession deepened. The collapse is likely to force Japanese companies to keep firing workers and closing factories, worsening an economy that shrank the most in 34 years last quarter.

“The pressure on companies to cut jobs and investment is rising and that will make the recession deep and protracted,” said Yasuhide Yajima, a senior economist at NLI Research Institute in Tokyo.

Shipments to Europe slid 47.4 percent in January from a year earlier, the Finance Ministry said. Exports to China fell 45.1 percent and those to Asia dropped 46.7 percent.

Imports fell 31.7 percent from a year earlier. The drop in exports was in line with economists’ estimates. Analysts predicted a 1.2 trillion yen trade deficit.

The yen fell to 96.91 per dollar as of 12:28 p.m. in Tokyo from 96.72 before the report. The currency is at the lowest level against the dollar in three months as the weakening economy reduces its allure as a haven.

The yen’s 23 percent gain against the dollar in 2008 eroded the value of exporters’ overseas sales, exacerbating losses at companies including Nissan Motor Corp. and Toyota Motor Corp. The exchange rate has also made Japanese exporters less competitive than their rivals in South Korea, where the won’s 16 percent drop this year has helped to shield earnings of companies including Hyundai Motor Co.

Still, the Japanese currency has weakened 7.2 percent this month, offering some relief to exporters while indicating investors’ growing pessimism about the economic outlook.

“People are coming to realize that Japan is in deep trouble,” said Hiroshi Shiraishi, an economist at BNP Paribas Securities Japan Ltd. in Tokyo. “Considering what’s happening on the export side, and the implications that has for the domestic economy, the yen is clearly not a buy.”

Japanese stocks touched a 26-year low yesterday and the government is considering buying shares to support equity prices, the Nikkei newspaper reported today, without saying where it got the information. The Nikkei 225 Stock Average has lost 17 percent of its value this year. It rose 1.6 percent in morning trading.

The world’s second-largest economy shrank at an annual 12.7 percent pace last quarter, the most since the 1974 oil shock, and analysts predict the slump will drag into next fiscal year. Japan may shrink a record 4 percent in the year starting April 1, according to economists surveyed. The worst contraction to date was fiscal 1998’s 1.5 percent drop.

Japan became more reliant on exports for growth in the past decade, making the economy more vulnerable to the global recession. Manufacturers shipped 21 percent of their goods abroad in 2008, up from 16 percent in 1998, according to the Bank of Japan.

Companies cut production an unprecedented 9.8 percent in December from a month earlier and the jobless rate climbed the most in 41 years to 4.4 percent. Economists predict a report on Feb. 27 will show factory output dropped 10 percent in January.

Nissan said this month it will fire 20,000 workers and post its first loss in nine years as the global car demand plunges. Toyota, which is forecasting its first operating loss in seven decades, will halve production in the current quarter versus the same period last year.

Central bank Governor Masaaki Shirakawa said last week that the economy will remain in a “severe” state next quarter and companies will struggle to obtain financing as investors shun risk. The bank, which lowered the key overnight lending rate to 0.1 percent in December, last week said it will buy corporate bonds for the first time to stem the credit squeeze.

The government has been unable to pass a stimulus package that could help encourage domestic spending in the absence of export demand. Prime Minister Taro Aso is struggling to get approval from the opposition-controlled upper house to spend 10 trillion yen to aid companies and households, whose sentiment is near a record low.