The bond bubble, the last and greatest bubble, will burst. China will realize, that it loses a lot of money by holding on to its U.S. Treasuries – also because very soon massive inflation will set in – and so it will finally sell them. The dollar will be destroyed, when the bond bubble bursts. The U.S. will experience a complete meltdown, that will lead to the ‘Greatest Depression’ in history.

The Obama administration will ‘find out’ that it is not possible to spend your way out of debt.

The Federal Reserve will ‘find out’ – once again – that exploding the money supply creates inflation and destroys the currency. 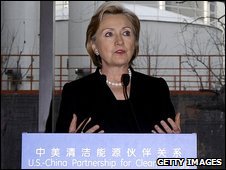 “Our economies are so intertwined,” Clinton said in an interview today in Beijing with Shanghai-based Dragon Television. “It would not be in China’s interest” if the U.S. were unable to finance deficit spending to stimulate its stalled economy.

Related article:
– China is right to have doubts about who will buy all America’s debt (Telegraph)

The U.S. is the single largest buyer of the exports that drive growth in China, the world’s third-largest economy. China in turn invests surplus earnings from shipments of goods such as toys, clothing and steel primarily in Treasury securities, making it the world’s largest holder of U.S. government debt at the end of last year with $696.2 billion.

China’s leaders understand that “the United States has to take some very drastic measures with the stimulus package, which means we have to incur debt,” Clinton said. The Chinese are “making a very smart decision by continuing to invest in Treasury bonds,” which she called a “safe investment,” because a speedy U.S. recovery will fuel China’s growth as well.

China boosted purchases of U.S. debt by 46 percent last year to a record. The Chinese government said last week it plans to keep buying Treasuries, adding that future purchases will depend on the preservation of their value and the safety of the investment. China’s currency reserves of $1.95 trillion are about 29 percent of the world total.

JPMorgan Chase & Co. predicted in a Feb. 6 report that China will keep buying Treasuries “not only for the near-term stability of the global financial system, but also because there is no viable and liquid alternative market in which to invest China’s massive and still growing reserves.”

Chinese attempts to diversify from Treasuries into more risk-oriented assets have not fared well. It has lost at least half of the $10.5 billion it invested in New York-based Blackstone, Morgan Stanley and TPG Inc. since mid-2007.

Asked by Dragon TV about the “Buy American” provision in the $787 billion stimulus package, Clinton downplayed worries that it would be a step toward protectionism, saying the provision “must be compliant with our international agreements.”

“Protectionism is not in America’s interest,” she said.

Clinton also said today that Treasury Secretary Timothy Geithner will co-chair an expanded bilateral dialogue on strategic and economic issues. The framework of that dialogue will be announced in April, when Obama and Chinese President Hu Jintao meet at the Group of 20 forum in London.

Under the Bush administration, the U.S. and China held a Strategic Economic Dialogue run by the Treasury Department, without the assistance of the secretary of state.

Clinton said the Obama administration felt that model was “very heavily dominated by economic concerns and by traditional Treasury priorities. They are very important, but that is not the only high-level dialogue that needs to occur.”

Today Clinton privately attended services at the Haidian Christian Church. She also met in the U.S. Embassy with 23 women activists in law, gender equality, poverty, AIDS and children’s rights, a continuation of similar gatherings she held when she visited China as first lady in the 1990s.

She didn’t meet with any dissidents during her stay, and was criticized by overseas human rights groups for saying that U.S. concerns about restrictions on freedoms in China must not interfere with cooperation on financial crisis, global warming, negotiations about North Korean nuclear program and terrorism.

China was the last leg of her first overseas trip as the top U.S. diplomat, which included stops in Japan, Indonesia and South Korea.

“World events have given us a full and formidable agenda,” Clinton said yesterday at a Beijing press conference with Yang following a 90-minute meeting. “It is essential that the United States and China have a positive cooperative relationship.”

Yang will visit the U.S. on March 9 for further discussions about the new strategic and economic dialogues.

China, which surpassed Germany in 2007 as the world’s third- largest economy, is confident of meeting this year’s 8 percent growth target, an achievement Yang says is “China’s contribution to the world economic recovery.”

Clinton and Chinese officials also discussed how to restart stalled talks, hosted in Beijing, aimed at getting North Korea to eliminate its nuclear weapons program.

Clinton said she had raised the issue of human rights in her talks with Yang, calling those concerns “an essential component of our global foreign policy.”

The U.S. State Department accuses China of political repression in Tibet and restrictions on worship throughout China. Groups including Amnesty International and Human Rights Watch said that Clinton shouldn’t set those concerns aside while talking with Chinese officials about other issues.

After meeting Yang, Clinton and her special envoy for climate change, Todd Stern, visited the year-old Taiyanggong power plant, a gas-fired low-emission facility powered by General Electric Co. generators and turbines which provides heat for 1 million homes and buildings in Beijing, including the U.S. embassy. The tour was aimed at highlighting opportunities for the world’s two biggest emitters of greenhouse gases to cooperate on clean energy.

Clinton noted that China, with its rapid industrial development, has surpassed the U.S. as the largest source of carbon emissions and said collaboration on green energy would offer a business opportunity.

“The international financial crisis is having a big impact on the entire world,” Wen told Clinton at their meeting. “I very much appreciate your comment that people should work together like passengers in a boat.”

At an earlier meeting, State Councilor Dai Bingguo told Clinton that she looked “younger and more beautiful” than she appears on television.

“Well, we will get along very well,” Clinton laughed.

To contact the reporters on this story: Indira Lakshmanan in Beijing at ilakshmanan@bloomberg.net