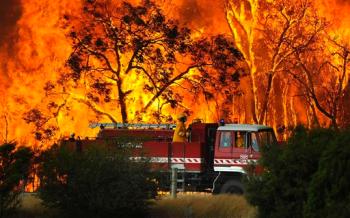 A fire truck moves away from out of control flames from a bushfire in the Bunyip Sate Forest near the township of Tonimbuk, 125 kilometers (78 miles) west of Melbourne, Saturday, Feb. 7, 2009. Walls of flame roared across southeastern Australia, razing scores of homes, forests and farmland in the sunburned country’s worst wildfire disaster in a quarter century. (AP Photo)

HEALESVILLE, Australia (AP) – Towering flames razed entire towns in southeastern Australia and burned fleeing residents in their cars as the death toll rose to 84 on Sunday, making it the country’s deadliest fire disaster.

At least 700 homes were destroyed in Saturday’s inferno when searing temperatures and wind blasts produced a firestorm that swept across a swath of the country’s Victoria state, where all the deaths occurred.

“Hell in all its fury has visited the good people of Victoria,” Prime Minister Kevin Rudd told reporters as he toured the fire zone on Sunday. “It’s an appalling tragedy for the nation.”

Thousands of exhausted volunteer firefighters were still battling about 30 uncontrolled fires Sunday night in Victoria, officials said, though conditions had eased considerably. It would be days before they were brought under control, even if temperatures stayed down, they said.

Government officials said the army would be deployed to help out, and Rudd announced immediate emergency aid of 10 million Australian dollars ($7 million).

The tragedy echoed across Australia. Leaders in other states – most of which have been struck by their own fire disasters in the past – pledged to send money and volunteer firefighters. Funds for public donations opened Sunday quickly started swelling.

The scene was utter devastation Sunday in at least two regions – the town of Marysville and several hamlets in the Kinglake district, both about 50 miles (100 kilometers) north of the state capital Melbourne.

In Kinglake, just five houses out of about 40 remained standing, an Associated Press news crew who overflew the region observed. Street after street was lined by smoldering wrecks of homes; roofs collapsed inward, iron roof sheets twisted from the heat. The burned-out hulks of cars dotted roads. Here and there, fire crews filled their trucks from ponds and sprayed down spot fires. There were no other signs of life.

Even from the air, the landscape was blackened as far as the eye could see. Entire forests were reduced to leafless, charred trunks, farmland to ashes. The Victoria Country Fire Service said some 850 square miles (2,200 square kilometers) were burned out.

“This is our house here – totally gone,” Wayne Bannister told Sky News, standing with his wife Anita amid a tangle of blackened timber and bricks in Kinglake.

Another man, who was not named, described to Sky battling the flames with a garden hose until he heard first his car gas tank, then a house propane tank, explode. He and his wife fled through a window.

“It rained fire,” he said. “We hid in our olive grove for an hour and watched our house burn.”

Witnesses said about 90 percent of the buildings in Marysville, a town of about 800 people located 20 miles (35 kilometers) west of Kinglake, had been ruined. Police said two people died there.

“Marysville is no more,” Senior Constable Brian Cross told the AP as he manned a checkpoint in nearby Healesville on a road leading into the town.

The official toll climbed higher during the day, reaching 84 at 20 locations by Sunday night, according to a police statement. It was expected to keep rising.

Australia’s previous worst fires were in 1983, when blazes killed 75 people and razed more than 3,000 homes in Victoria and South Australia state. Seventy-one died and 650 buildings were destroyed in 1939.

Police said charred bodies had been found in cars in at least two places – suggesting people were engulfed in flames as they tried to flee.

At least 80 people were hospitalized with burns. Dr. John Coleridge of Alfred Hospital, one of the largest in the fire zone, said injuries ranged from scorches on the feet of people who fled across burning ground to life-threatening burns. At least three would probably die, he said.

Temperatures in the area dropped to about 77 F (25 C) on Sunday, but along with cooler conditions came wind changes that officials said could push fires in unpredictable directions.

Dozens of fires were also burning in New South Wales state, where temperatures remained high for the third consecutive day. Properties were not under immediate threat.

Wildfires are common during the Australian summer. Government research shows about half of the roughly 60,000 fires each year are deliberately lit or suspicious. Lightning and people using machinery near dry brush are other causes.