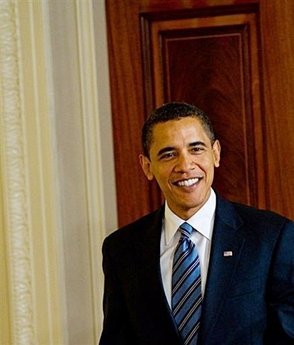 US President Barack Obama arrives to speak on his economic stimulus proposal from the East Room of the White House in Washington, DC. The divided US House of Representatives on Wednesday approved an 819-billion-dollar stimulus package touted by Obama as a vital remedy to revive the ailing US economy. (AFP/Saul Loeb)

President Obama promised during his campaign that lobbyists “won’t find a job in my White House.”

Here are former lobbyists Obama has tapped for top jobs:

Eric Holder, attorney general nominee, was registered to lobby until 2004 on behalf of clients including Global Crossing, a bankrupt telecommunications firm.

Tom Vilsack, secretary of agriculture nominee, was registered to lobby as recently as last year on behalf of the National Education Association.

William Lynn, deputy defense secretary nominee, was registered to lobby as recently as last year for defense contractor Raytheon, where he was a top executive.

William Corr, deputy health and human services secretary nominee, was registered to lobby until last year for the Campaign for Tobacco-Free Kids, a non-profit that pushes to limit tobacco use.

Ron Klain, chief of staff to Vice President Joe Biden, was registered to lobby until 2005 for clients, including the Coalition for Asbestos Resolution, U.S. Airways, Airborne Express and drug-maker ImClone.

Mona Sutphen, deputy White House chief of staff, was registered to lobby for clients, including Angliss International in 2003.

Melody Barnes, domestic policy council director, lobbied in 2003 and 2004 for liberal advocacy groups, including the American Civil Liberties Union, the Leadership Conference on Civil Rights, the American Constitution Society and the Center for Reproductive Rights.

Cecilia Munoz, White House director of intergovernmental affairs, was a lobbyist as recently as last year for the National Council of La Raza, a Hispanic advocacy group.

Michael Strautmanis, chief of staff to the president’s assistant for intergovernmental relations, lobbied for the American Association of Justice from 2001 until 2005.