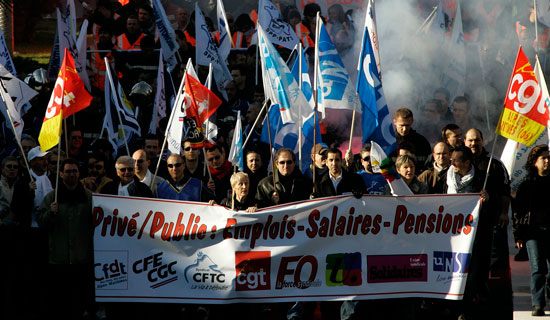 PARIS: A nationwide protest against Nicolas Sarkozy’s economic policies drew more than one million demonstrators into the streets of France on Thursday, in the biggest popular challenge to the president since he took office in 2007.

Organizers hailed the demonstrations – meant to highlight unemployment and declining spending power in a time of crisis – as a great success.

François Chérèque, secretary general of the CFDT union, called the protest “the biggest nationwide demonstrations in 20 years.” He said in Paris that private sector workers had turned out in surprisingly large numbers, showing that workers from across the spectrum were “expressing their fears about the future.”

But participation in a nationwide strike called by eight big unions appeared to have fallen short of expectations, and came nowhere near the general strike they had called for. In contrast with previous strikes that virtually shut down transportation in the capital, a new law mandating a minimum level of service appeared to have kept most Parisians moving.

Workers, mostly government employees, walked off their jobs throughout the country – snarling transportation, closing public offices and schools, and forcing airports to reduce flights. Government estimates suggested that from one-quarter to one-third of public sector workers had joined the protest. Employees of some large international companies joined in, even employees of the bourse operator NYSE-Euronext.

Faced with expectations that the economy will contract by nearly 2 percent this year, Sarkozy in December announced a €26 billion, or $34 billion, stimulus plan. He has earmarked capital injections of more than €10 billion for banks and said the government would help struggling automakers. But his determination to reduce the number of permanent public sector jobs, especially in the schools, has hit a nerve.

As the Paris marchers got started Thursday afternoon, tens of thousands of people crowded into the Place de la Bastille. A festive atmosphere prevailed, with rock music thumping and huge balloons emblazoned with the names of the eight unions that organized the march.

“People are sending a message that they are fed up with Sarkozy’s government,” said Frédérique Henrard, 40, a writing teacher at a high school in the suburb of Noisiel, east of Paris. She added that she did not have high expectations for a change of policy because “Sarkozy doesn’t care what people think, he just goes straight ahead.”

As the Paris march was ending, more than 100 youths clashed with police near the Opera Garnier, hurling various objects. The police responded with tear gas and some trash cans were set afire. No arrests were immediately reported.

In a statement late Thursday, Sarkozy adopted a conciliatory tone, noting that the public had “legitimate concerns.” The crisis, he said, “imposes a duty upon the authorities to listen, to discuss and at the same time a great determination to act.” He said he would meet with union leaders in Februry to explain his 2009 reform agenda and discuss how to best carry it out.

French governments have often backed down from unpopular programs when the public opposition became too heated. According to the results of a poll by CSA-Opinion for Le Parisien, 69 percent of the French either “supported” or “had sympathy” for the demonstrations. No margin of error was available for the nationwide survey of 1,007 French adults carried out Jan. 21 and 22.