What Lindsey Williams said is coming to pass:
The elite is bankrupting the Arabs and driving them back into the desert by keeping the price of oil below $50/barrel. (Here) 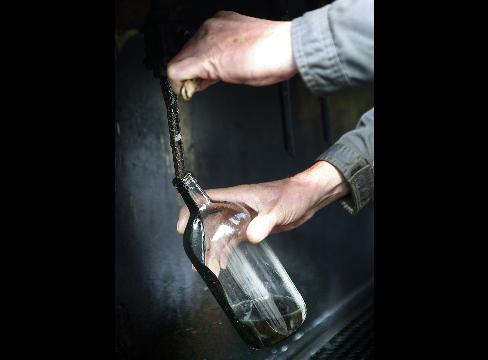 Oil is taken for sampling by staff at the Esso oil refinery in Slagentangen, Norway, on May 15, 2008. Photographer: Heidi Wideroe/Bloomberg News

Jan. 14 (Bloomberg) — Tumbling oil prices are forcing many of the richest Persian Gulf states to record budget deficits and limit a critical source of foreign investment for poorer Arab countries.

Central bank governors and finance ministers from the 22- member Arab League gathered in Kuwait City today for a week of meetings on the global financial crisis and Gulf efforts to create a single currency. The conference opened with a minute of silence for the more than 900 Palestinians killed in a 2 1/2-week Israeli offensive in the Gaza Strip.

Crude is now selling at below the budget break-even point for seven of the Arab world’s 10 top oil producers and Saudi Arabia, the world’s biggest exporter, is forecasting its first deficit in at least seven years. Poorer Arab states are facing a fall in foreign investment with Egypt expecting inflows to almost halve this year, according to EFG-Hermes Holding SAE, the largest Arab investment bank by market value.

“We have to find ways to limit the impact which could hurt the Arab economy and make sure economic growth in Arab countries continues at appropriate levels,” Kuwaiti Finance Minister Mustafa Jassim al-Shimali said, referring to the global crisis. “We are not immune to its negative effects.”

Heads of state, including Saudi King Abdullah and Egyptian President Hosni Mubarak, will attend the main sessions of the Arab Economic Summit on Jan. 19-20 and will hold talks on the Israel’s military incursion, the state-owned Kuwait News Agency reported. A meeting of foreign ministers is also scheduled for Jan. 16 to discuss the conflict.

Oil prices have fallen almost 75 percent from their July high, as the global economy sank into recession, straining budgets of crude exporters. Most will probably tap into their oil savings to maintain spending and avoid recession.

Saudi Arabia said it will post a 65 billion riyal ($17 billion) deficit this year; Oman said it will record a budget shortfall of 810 million rials ($2.1 billion); while Dubai, the second-largest of the seven emirates that make up the United Arab Emirates, forecasts a shortfall of 4.2 billion dirhams ($1.1 billion).

“If governments cut back on spending they might make the economic slowdown worse,” said Giyas Gokkent, chief economist at the National Bank of Abu Dhabi PJSC, the U.A.E.’s second- biggest bank by assets. “Policy must be counter-cyclical.”

EFG-Hermes is forecasting that the Saudi economy will shrink by 0.9 percent this year while Kuwait will contract by 1.2 percent. Growth will remain positive in Qatar, Bahrain and Oman and the U.A.E. economy will stagnate.

Saudi Arabia posted a record budget surplus of 590 billion riyals ($157 billion) last year as oil rose to a record $147.27 a barrel in July. That was about the same size as Egypt’s gross domestic product.

“Rising oil prices were the catalyst for exceptionally strong growth over the past six years and falling prices will bring a slowdown in 2009,” Simon Williams, a Dubai-based economist for HSBC Holdings Plc, said by e-mail. “The Gulf can manage the deceleration, but the slowdown is going to be felt across the region and in all sectors of the economy.”

In Arab countries that have depended on their rich Gulf neighbors for investment, the impact may be felt the hardest.

Foreign direct investment in Egypt is projected to fall to $7 billion this year from $13.2 billion in 2008, EFG-Hermes said in a Nov. 13 report. About 20 percent of the investment came from the Gulf. The 8.6 billion dollars in remittances that were sent home by Egyptians working abroad last year are expected to shrink by 10 percent in the fiscal year starting in June, EFG-Hermes said. Half of that money comes from the Gulf.

The bank expects Jordan’s economic growth to slow to 4.7 percent this year from an estimated 5.7 percent in 2008, in part because of lower remittances and foreign investment from the Gulf.

To help boost regional trade, Gulf Arab leaders on Dec. 30 approved an agreement to create a Gulf central bank and single currency. The accord must now be endorsed by the national governments of Saudi Arabia, Kuwait, Bahrain, the U.A.E. and Qatar. Oman has pulled out of the proposal.

To contact the reporter on this story: Camilla Hall in London at chall24@bloomberg.net.