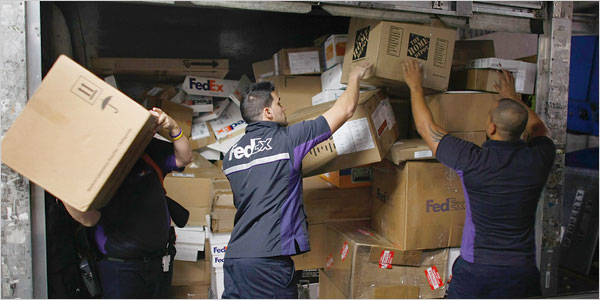 FedEx and other pinched companies have cut their contributions to 401(k)’s, which could force some people to work longer. Joe Raedle/Getty Images

Companies eager to conserve cash are trimming their contributions to their workers’ 401(k) retirement plans, putting a new strain on America’s tattered safety net at the very moment when many workers are watching their accounts plummet along with the stock market.

When the FedEx Corporation slimmed down its pension plan last year, it softened the blow by offering workers enriched 401(k) contributions to make up for the pension benefits some would lose. But last week, with Americans sending fewer parcels and FedEx’s revenue growth at a standstill, the company said it would suspend all of its contributions for at least a year.

“We will have to work more years and retire with less money,” said Lee Higham, a 44-year-old senior aircraft mechanic at FedEx, who has worked there for 20 years. “That’s what we are up against now.”

FedEx is not the only one. Eastman Kodak, Motorola, General Motors and Resorts International are among the companies that have cut matching contributions to their plans since September, when the credit markets froze and companies began looking urgently for cash. More companies are expected to suspend their matching contributions in 2009, according to Watson Wyatt, a benefits consulting firm.

For workers, the loss of a matching contribution heightens the pain of a retirement account balance shriveling away because of the plunging stocks markets.

To many retirement policy specialists, the lost contributions are one more sign of America’s failure as a society to face up to the graying of the population and the profound economic forces it will unleash.

Traditional pensions are disappearing, and Washington has yet to ensure that Social Security will remain solvent as baby boomers retire and more workers are needed to support each retiree.

The company cutbacks may mean that some employees put less money into their retirement accounts. Even if they do not, the cuts, while temporary, will have a permanent effect by costing many workers years of future compounding on the missed contributions. No one knows how long credit will remain scarce for companies, or whether companies will start making their matching contributions again when credit loosens and business improves.

“We have had a 30-year experiment with requiring workers to be more responsible for saving and investing for their retirement,” said Teresa Ghilarducci, a professor of economics at the New School. “It has been a grand experiment, and it has failed.”

In the typical 401(k) plan, the employer’s matching contribution is more than just money for retirement. It also motivates employees to set aside more of their own money for old age. The more that workers save in a 401(k) plan, generally, the more “free money” they can get from their employers under the matching provisions.

Retirement policy specialists said they did not expect employees to react immediately to the loss of this incentive by stopping their own contributions. Study after study has shown that employees procrastinate when it comes to retirement-plan chores, and in this case the inertia may work, unwittingly, in their favor.

Americans, however, are facing extreme household financial pressure. President-elect Obama has said that he would support allowing withdrawals from retirement plans without penalties, which would provide short-term relief but would further undercut American’s long-term savings.

Benefits specialists said that if matching contributions continued to dwindle, fewer newly hired workers could be expected to join 401(k) plans. And employees might eventually slow or stop their contributions if the recession drags on and their own cash runs short.

“The problem is, we are heading into this serious recession, and we don’t know how long it will go on for,” said Alicia Munnell, director of the Center for Retirement Research at Boston College. “The bottom line is, people will have less money in their 401(k) plans, not just because the financial crisis has decimated their assets, but also because they will not have the employer match for some time.”

Currently, most companies that offer 401(k) plans do provide some sort of matching contributions, according to David Wray, president of the Profit Sharing/401(k) Council of America, an association of employers that provide such plans.

The most typical arrangement is for employers to match 50 cents of every dollar their employees set aside in their retirement accounts, up to 6 percent of pay. Sometimes the match is more, sometimes less, and some employers vary it depending on profitability. Over all, the employer’s cost usually works out to about 3 percent of payroll.

The latest 401(k) cutbacks underscore workers’ vulnerability in an age when companies have been replacing defined-benefit pension plans with the newer 401(k) design. Modern 401(k) plans give workers the power to opt in and out and require them to invest their own money, bearing market risk on their own. That may be appealing when the markets are rising, but it can be terrifying when they fall, as they have recently.

An employer’s contributions to a traditional pension plan cannot be switched on and off at will. Federal rules set a firm contribution schedule, with deadlines and penalties for companies that fall behind. Employers also get significant tax and accounting benefits from operating a traditional pension plan, so they tend to think long and hard before freezing such a plan to save money when the economy cools.

In a 401(k) plan, by contrast, the employer has much greater freedom to stop making matching contributions when times are tough. The contributions are normally measured as a percentage of payroll, and the savings from any cuts are realized immediately. That greatly simplifies planning and making changes.

“Every percent you cut is a percent of payroll,” Ms. Munnell said. “It comes down to the choice of laying people off, or cutting back on some fringe benefits.”

Many of the latest 401(k) cutbacks are turning up in industries with obvious financial problems, like the auto industry, health care and newspaper publishing. Industries that depend on free-spending consumers, like resorts and casinos, are also seeing cuts. Often when one company in an industry cuts its benefits others will follow, to keep their labor costs competitive.

General Motors and Ford Motor have both suspended their matching contributions to their salaried employees’ 401(k) accounts, although their pension plans for unionized workers are unchanged.

Motorola, struggling to stay competitive, stopped contributions to its 401(k) plan this month and froze its pension plan as well.

In addition to stopping their 401(k) matching contributions, companies have been freezing salaries this fall, shifting more of the cost of health care to their workers, and laying people off.

“These are really hard times and people are losing their jobs, and in some ways, a suspension of a 401(k) match, while bad, is probably one of the lesser evils out there,” Ms. Munnell said.

In announcing the suspension of the contributions last week, FedEx made clear that its workers in the sorting centers would not be the only ones feeling the pinch. Pay to senior executives is to be cut by 7.5 to 10 percent, and the chief executive, Frederick W. Smith, said he would take a 20 percent pay cut. The cutbacks are projected to save $200 million in the remainder of the 2009 fiscal year and $600 million in the 2010 fiscal year.