The Fed is creating a crisis that will be even worse than the Great Depression.

When the dollar is starting to fail commodities will skyrocket.

The dollar is soon as good as toilet paper.

Ron Paul, Peter Schiff and Jim Rogers warned a million times about this.

And remember that for all the people who lose their money and their homes there is always someone who profits from that, because these assets do not just disappear into the void. So who profits?!

I am not saying like many others that Ben Bernanke and Hank Paulson do not know what they are doing. They know exactly what they are doing and they do what they are told to do by their elite masters. (Look who founded the Federal Reserve and why. You may watch Zeitgeist, The Movie, Final Edition Part III of the movie which starts at 1:14:30.)

Bush, Obama, Bernanke and Paulson are all puppets. Nothing they do is really for the people, absolutely NOTHING.

Even if they create a stimulus package and give you a check they know that that money has to be paid back with interest and that it will be the taxpayer who has to pay for it all.

All they do now is destroying the dollar, the economy and the middle class. I have studied economics and I can assure you that it can be easily proven that stimulus packages only have a short term effect and that they have very harmful effects in the long run.

If you want to look good in the short term like Mr. Obama than a stimulus package is just fine. I even seriously doubt that it will have much effect because the US are broke. The stimulus package has to be financed and there is not much confidence left that the US can pay all that debt back. So nobody will soon be willing to buy US bonds anymore and creating more money out of thin air will create another Zimbabwe. 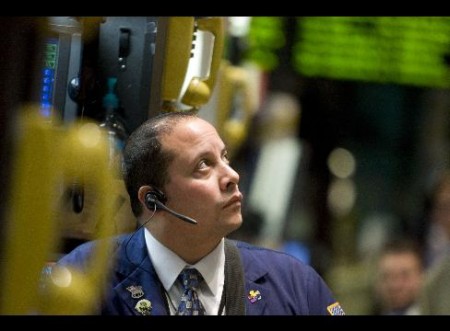 Jeffrey Vazquez looks at a television after the Federal Open Market Committee’s (FOMC) rate decision on the floor of the New York Stock Exchange in New York, on Dec. 16, 2008. Photographer: Andrew Harrer/Bloomberg News

Dec. 16 (Bloomberg) — The Federal Reserve cut the main U.S. interest rate to as low as zero for the first time and shifted its focus to the amount and type of debt it buys, seeking to revive credit and end the longest slump in a quarter- century.

The Fed “will employ all available tools to promote the resumption of sustainable economic growth and to preserve price stability,” the Federal Open Market Committee said today in a statement in Washington. “Weak economic conditions are likely to warrant exceptionally low levels of the federal funds rate for some time.”

Stocks soared, while Treasury notes rallied in anticipation the Fed will buy the securities to reduce borrowing costs for consumers and companies. Nine rate cuts in the prior 14 months and $1.4 trillion in emergency lending had failed to reverse the economic downturn. The Fed said today it will target a federal funds rate of between zero and 0.25 percent, a reduction from the 1 percent level that the Fed failed to hit.

Announcements of new lending programs or asset purchases will now be principal signals of policy, a senior Fed official said in a conference call with reporters. The central bank is considering whether to provide more information about the composition and targeted size of its balance sheet, the official said on condition of anonymity.

“The focus of the committee’s policy going forward will be to support the functioning of financial markets and stimulate the economy through open market operations and other measures that sustain the size of the Federal Reserve’s balance sheet at a high level,” the FOMC said.

The dollar tumbled against the euro and yen. Stocks climbed, pushing the Dow Jones Industrial Average up 359.61 points, or 4.2 percent, to 8924.14.

“The Fed is sending a message that it will print money to an unlimited extent until it starts to see the economy expanding,” William Poole, former president of the St. Louis Fed and now a senior fellow at the Cato Institute in Washington, said in an interview with Bloomberg Television. Poole is also a contributor to Bloomberg News.

The statement noted that the Fed has already announced it will purchase the debt issued or backed by government-chartered housing finance companies, and said the Fed is ready to expand the program. The central bank said it continues to weigh the potential benefits of buying longer-term Treasury securities.

The deepening economic slump pushed unemployment to 6.7 percent last month, the highest level since 1993, while builders broke ground on the fewest new homes since record-keeping began in 1947. Deflation is also emerging as a risk: consumer prices fell the most on record in November, the Labor Department said today.

Today’s vote was unanimous. In a related move, the Fed lowered the rate on direct loans to banks and securities dealers to 0.5 percent. It set the payment on the reserves that commercial banks hold at the Fed at 0.25 percent, down from 1 percent.

Fed policy makers twice pared the federal funds rate, or overnight lending rate, to 1 percent since adopting it as the main tool of monetary policy in the late 1980s. The 1 percent target held from June 2003 to June 2004, and again from the end of October to today.

The Bank of Japan has been the only major central bank in modern times to mix a policy of steep rate reductions with quantitative easing, or the strategy of injecting more reserves into the banking system than needed to keep the target rate at zero.

Japan’s central bank kept its main rate at zero from 2001 to 2006 while flooding the banking system with extra cash to encourage lending, spur growth and overcome deflation. The abundant funds failed to prompt lending by commercial banks, which expanded their reserves at the central bank almost nine times by early 2004.

The senior central bank official said the Fed’s policy differs from Japan’s approach by focusing on purchases of short- term debt and other assets in constrained markets rather than on adding cash to the banking system.

The FOMC said that inflation pressures “have diminished appreciably.” The senior Fed official said deflation is not a major concern to the central bank.

The Fed has enlarged bank reserves, supported issuance of commercial paper and provided liquidity to government bond dealers. It is also swapping dollars with the European Central Bank and its other counterparts to supply banks in other countries.

The central bank is trying to lower mortgage rates by purchasing up to $100 billion of debt issued by housing-finance providers Fannie Mae and Freddie Mac and $500 billion of mortgage-backed securities guaranteed by the companies.

The moves have swelled the Fed’s balance sheet to $2.26 trillion from $868 billion in July 2007. That’s in addition to the $700 billion Troubled Asset Relief Program, which the U.S. Treasury has used since October to channel about $335 billion of capital injections into banks and other financial companies.

Still, the economy has crumbled, with employers cutting 533,000 jobs from payrolls in November for a total loss this year of 1.9 million, which more than erases the 2007 gain of 1.1 million.

The Fed may increase its asset purchases and lend against lower-quality debt should Treasury provide funding, the senior central bank official said.

Macroeconomic Advisers LLC, a St. Louis-based consultant, says the economy is probably shrinking at a 6.5 percent annual pace this quarter, which would be the biggest drop since 1980.

Early this month, as a panel of leading U.S. economists declared the recession began in December 2007, Bernanke signaled he was ready to dig deeper into the central bank’s toolkit. He said he may use less conventional policies, such as buying Treasury securities, because his room to lower the main U.S. rate was “obviously limited.”

The federal funds target rate has weakened as a monetary policy tool because the Fed’s flood of funds has caused the average daily rate to trade below the policy goal every day since Oct. 10.

The gap between the target and the effective rate, or average daily market rate, has averaged about a half point since Sept. 12. The gap averaged just above zero from the start of this year through Sept. 2.

ECB President Jean-Claude Trichet said yesterday there’s a limit to how far the bank can cut interest rates and signaled policy makers may pause in January. “Do we have a feeling there is a limit to the decrease in rates? At this stage certainly yes,” Trichet told journalists in Frankfurt.

While the Fed can’t push interest rates below zero, “the second arrow in the Federal Reserve’s quiver — the provision of liquidity — remains effective,” Bernanke said in a Dec. 1 speech.