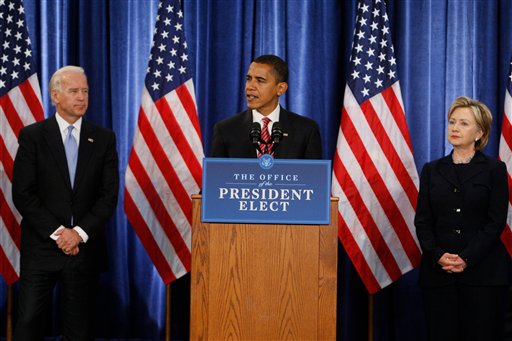 CHICAGO (AP) – President-elect Barack Obama named former campaign rival Hillary Rodham Clinton as his secretary of statae on Monday, and announced Robert Gates would remain as defense secretary, making President Bush’s Pentagon chief his own in the drive to wind down the U.S. role in Iraq.

The announcements rounded out the top tier of the team that will advise the incoming chief executive on foreign and national security issues in an era marked by wars in Iraq and Afghanistan and terrorism around the globe.

“The time has come for a new beginning, a new dawn of American leadership to overcome the challenges of the 21st century,” Obama said as his Cabinet picks stood behind him on a flag-draped stage.

“We will strengthen our capacity to defeat our enemies and support our friends. We will renew old alliances and forge new and enduring partnerships.”

Obama said his appointees “share my pragmatism about the use of power, and my sense of purpose about America’s role as a leader in the world.”

“I assembled this team because I am a strong believer in strong personalities and strong opintions,” he said. “I think that’s how the best decisions are made. One of the dangers in a White House, based on my reading of history, is that you get wrapped up in group-think and everybody agrees with everything and there’s no discussion and there are no dissenting views. So I am going to be welcoming a vigorous debate inside the White House.

“But understand, I will be setting policy as president. I will be responsible for the vision that this team carries out, and I will expect them to implement that vision once decisions are made.”

Gates’ presence in Chicago made him a visible symbol of the transition in power from the Bush administration to one headed by Obama.

The president-elect, reprising a campaign vow, said he would give the military a new mission as soon as he takes office: “responsibly ending the war in Iraq through a successful transition to Iraqi control.” In his announcement remarks, he did not mention his oft-repeated pledge to withdraw most U.S. combat troops within 16 months, although he referred to it in response to a question several moments later.

Clinton, Holder and Napolitano all require confirmation by the Senate.

Jones, as a White House official, does not. Nor does Gates, already confirmed to his post.

Obama also appointed campaign foreign policy aide Susan Rice as his ambassador to the United Nations. Obama said he would make her a member of the Cabinet, an increase in stature from the Bush era.

Obama’s announcements marked a shift in emphasis after a spate of appointments last week for his economic team, led by Timothy Geithner as treasury secretary.

He now has selected half the members of his Cabinet, and is making his picks at an unusually quick pace during his transition as he seeks to fulfill his goal of being able to “hit the ground running” when he takes the oath of office on Jan. 20.

Obama introduced Clinton first, saying of his former presidential rival, “She possesses an extraordinary intelligence and toughness, and a remarkable work ethic. … She is an American of tremendous stature who will have my complete confidence, who knows many of the world’s leaders, who will command respect in every capital, and who will clearly have the ability to advance our interests around the world.”

Clinton will give up her seat as a senator from New York to join the Obama Cabinet. Her appointment was preceded by lengthy negotiations involving her husband, the former president, whose international business connections posed potential conflicts of interests.

The former president also agreed to disclose the donors to the foundation that built his library, as well as contributors to his international foundation.

She said to Obama, in a brief turn at the lectern, “I am proud to join you … and may God bless you and our great country.”

Sen. Clinton had scarcely finished speaking when her husband issued a written statement. “She is the right person for the job of helping to restore America’s image abroad, end the war in Iraq, advance peace and increase our security, by building a future for our children with more partners and fewer adversaries, one of shared responsibilities and opportunities,” he said.

Gates said he was “mindful that we are engaged in two wars and face other serious challenges at home and around the world.”

“I must do my duty as they do theirs,” he said of the men and women in uniform in Iraq, Afghanistan and elsewhere. “How could I do otherwise?”

He said he was “honored to serve President-elect Obama.”

Gates’ appointment fulfilled a campaign promise by Obama, the naming of a Republican to his Cabinet.

Holder vowed to revitalize a Justice Department staggered by scandal during the Bush administration, both over the dismissal of federal prosecutors and the administration’s program of wiretapping as part of its war against terrorists.

Napolitano, like Clinton, must resign her current job. As a border state governor, she has experience with immigration issues, one of the pressing concerns that will confront the new administration.

Obama said Jones, his national security adviser, “will bring to the job the dual experience of serving in uniform and as a diplomat. He has commanded a platoon in battle, served as supreme allied commander in a time of war and worked on behalf of peace in the Middle East.”

The event was unlike those of last week, when Obama was the only one to speak. This time, he called on each of his appointees to make remarks, beginning with Clinton.

Vice President-elect Joe Biden said each member of the team shares the goals and the principles of the new administration that “strength and wisdom must go hand in hand,” and that America’s security “is not a partisan issue.”

Obama has settled on additional members of his Cabinet, although they have not yet been announced.

Among them are former Senate Democratic leader Tom Daschle to be his secretary of health and human services and New Mexico Gov. Bill Richardson to be commerce secretary.

Secretary of State Condoleezza Rice, asked about Clinton at a news conference in London, said Monday: “I think that she will bring enormous energy and intellect and skill to the position.”

“Most important, I know her to be somebody who has what you need most in this job, which is a deep love for the United States of America,” Rice said. She added, “As to advice, I’ll give her that advice privately, and then she won’t-and you won’t-hear from me again.”