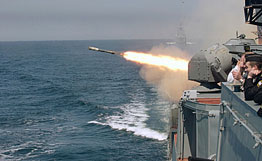 However, Baltin said the chances of a military confrontation between NATO and Russia in the Black Sea are negligible.

“We will not strike first, and they do not look like people with suicidal tendencies,” he said.

NATO announced its decision to deliver humanitarian aid to Georgia after the conclusion of hostilities between Tbilisi and Moscow over breakaway South Ossetia on August 12. Moscow recognized on Tuesday both South Ossetia and Abkhazia, another breakaway Georgia republic, despite being urged by Western leaders not to do so.

Russia’s General Staff later said the alliance’s naval deployment in the Black Sea “cannot fail to provoke concern”, with unidentified sources in the Russian military saying a surface strike group was being gathered there.

According to Russian military intelligence sources, the NATO warships that have entered the Black Sea are between them carrying over 100 Tomahawk cruise missiles and Harpoon anti-ship missiles.