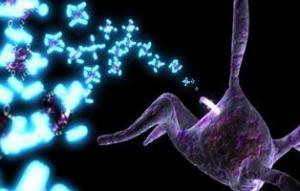 ScienceDaily (Aug. 25, 2008) – Yale University scientists today reported evidence suggesting that the tiny cilia found on brain cells of mammals, thought to be vestiges of a primeval past, actually play a critical role in relaying molecular signals that spur creation of neurons in an area of the brain involved in mood, learning and memory.

The cilia found on brain cells of mammals until recently had been viewed as a mysterious remnant of a distant evolutionary past, when the tiny hair-like structures were used by single-celled organisms to navigate a primordial world.

“Many neuroscientists are shocked to learn that cells in the brain have cilia. Thus it was even more exciting to show that cilia have a key function in regulating the birth of new neurons in the brain,” said Matthew Sarkisian, post doctoral fellow in the department of neurobiology and co-first author on the study.

In the past decade, scientists have discovered primary cilia may have important functions in many animals. For instance, in 2000, Yale University scientists discovered defects in these cilia could lead to rare type of kidney disease. Researchers have been finding new functions for primary cilia ever since.

In the present study, researchers discovered that in mice, primary cilia act like antennae to receive and coordinate signals that spur creation of new brain cells. These cilia receive signals from a key protein required in development called “sonic hedgehog.” When the Yale team deleted genes needed to form primary cilia, they discovered that mice developed significant brain abnormalities including hydrocephalus. They also found that the absence of primary cilia on neural stem cells disrupted the ability of sonic hedgehog to signal neural stem cells to initiate creation of new neurons in the brain.

The study was funded by the National Institutes of Health and the Kavli Institute. The findings are published online in the journal Proceedings of the National Academy of Science Aug. 11, 2008.