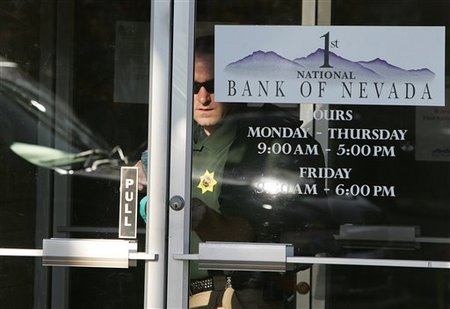 The FDIC said the takeover of the failed banks was the least costly resolution and all depositors – including those with funds in excess of FDIC insurance limits – will switch to Mutual of Omaha with “the full amount of their deposits.”

The FDIC also said accountholders can access their funds during the weekend by writing checks or using ATM or debit cards.

As of June 30, the closed banks had total assets of $3.6 billion. That’s down from $4.1 billion six months earlier. Most of the assets are in 1st National while First Heritage accounts for $254 million.

Calls to 1st National were referred by a receptionist to Joe Martony, an executive vice president in Scottsdale, Ariz. Martony didn’t return repeated calls to his office.

In Nevada, 1st National has 10 branches and employs about 350 people. Five of its branches are in Las Vegas, three are in the Reno-Sparks area, one is in Carson City and one is in Laughlin. Notices of the closure were being posted late Friday.

Bill Uffelman of the Nevada Bankers Association said Friday the FDIC action “is a reflection of the times for the banks. It’s a poor economy.”

Uffelman cautioned against the sort of consumer concern that prompted many customers of IndyMac Bank branches to wait for hours in line to withdraw funds across Southern California last week after that bank was seized by federal regulators. All FDIC-insured bank deposits are guaranteed by the FDIC up to $100,000, he noted.

Gov. Jim Gibbons said the bank takeover will be closely monitored in Nevada “to ensure there’s minimal disruption to business and that employees’ jobs are protected as much as possible.”

Arizona Gov. Janet Napolitano spokeswoman Shilo Mitchell said in a statement that the FDIC’s takeover of 1st National is not indicative of the overall banking climate in Arizona.

“It’s very important that Arizonans know that their deposits are secure,” said Felecia Rotellini, superintendent of Arizona Department of Financial Institutions. “They are well-managed and the 1st National Bank of Arizona issues should not cause any panic in Arizona.”