If Wachovia fails, then you can probably forget about the FDIC. 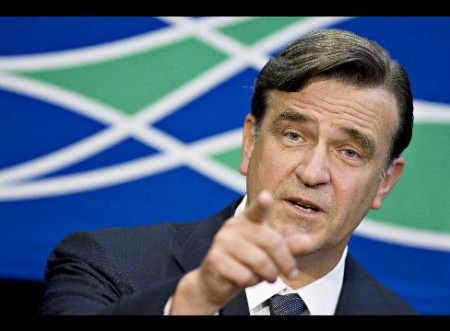 The second-quarter loss of $4.20 a share compared with net income of $2.3 billion, or $1.23, a year earlier, the Charlotte, North Carolina-based company said today in a statement. The loss included a $6.1 billion charge tied to declining asset values.

The writedown, job cuts and second dividend reduction in three months reflect Steel’s response to the worst housing market since the Great Depression, which cost former CEO Kennedy Thompson his job after eight years. Wachovia has dropped more than 75 percent since it spent $24 billion two years ago to buy Golden West Financial Corp. just as home prices were peaking.

“Steel is clearly trying to get his arms around this,” said Joseph Gordon, president of Gordon Asset Management in Durham, North Carolina, which owns Wachovia shares and manages more than $200 million. Even so, “We aren’t advising any clients to buy until they fess up and go full transparency on Golden West and their commercial lending problems.”

Wachovia shares have declined 65 percent this year, the second-worst performance on the 24-company KBW Bank Index behind National City Corp., Ohio’s largest bank. The stock fell $1.18, or 9 percent, to $12 at 9:55 a.m. The cost of protecting the bank’s debt rose 10 basis points to 315, according to broker Phoenix Partners Group. Fitch Ratings cut Wachovia one level to A+ from AA-, citing its mortgage business, and Moody’s downgraded the bank to A1 from Aa3.

Wachovia, whose job cuts amount to about 5 percent of the bank’s workforce, lowered the dividend to 5 cents a share from 37.5 cents and will leave 4,440 positions open, according to a presentation to analysts today. Steel, 56, also said the company is moving to “sell selected non-core assets” and reduce the number of business customers who only use the bank for loans rather than other services. Wachovia expects to cut expenses during the second half of this year by $490 million and then reduce 2009 spending by $1.5 billion.

Wachovia’s goodwill impairment charge didn’t include its Golden West business “due to the value of the retail banking franchise,” the company said. The impairment included $4.5 billion in reduced value of commercial loans, plus $597 million in investment-banking assets.

Wachovia said July 9 that losses in the three months ended June 30 would be at least $2.6 billion, after $3.3 billion of losses on option-adjustable-rate mortgages. The loans let borrowers skip part of their payment and add the balance to principal. The bank said last month that it stopped offering the mortgages.

Declining house prices in California and Florida, which account for about 70 percent of Golden West’s $121 billion of loans, have left 14 percent of the bank’s option-ARM customers with zero or negative equity in their homes. Merrill Lynch & Co. Merrill Lynch & Co. analyst Edward Najarian estimated on July 9 that losses from the loans would total about $18 billion over four years, double those previously estimated by Wachovia.

The outlook for housing worsened in the second quarter, Wachovia said. Twenty-five metropolitan areas account for 90 percent of the option ARM historical losses with 22 of those markets in either California or Florida, the bank said. The exceptions include Washington D.C., Phoenix, Arizona and Las Vegas.

Profit at the division that includes retail, small business and commercial customers fell 23 percent to $1.12 billion. Growth in new checking accounts slowed from the previous quarter.

Steel has called Wachovia’s consumer banking franchise the best in the U.S. because of its coverage of affluent and fast- growing markets stretching from Connecticut to California.

The corporate and investment bank earned $209 million, compared with $779 million a year earlier. Wachovia has announced 500 job cuts at the unit this year as demand wanes for packaging home loans into securities and advice on mergers.

In addition to Golden West, Thompson, 57, was criticized by shareholders after Wachovia was forced to pay as much as $144 million to settle complaints it failed to police telemarketers and payment processors who looted customer accounts. The bank also reported a $975 million charge because of a tax court ruling involving leasing transactions.

Wachovia’s securities division was inspected last week by regulators from more than five states who delivered subpoenas as part of a probe into the company’s sales of auction-rate bonds.

Wachovia’s Tier 1 capital ratio — a benchmark regulators use to monitor a lender’s ability to withstand loan losses — rose to 8 percent from 7.42 percent at the end of the first quarter. The minimum for a “well-capitalized” rating from U.S. regulators is 6 percent.

To contact the reporter on this story: David Mildenberg in Charlotte, North Carolina, at dmildenberg@bloomberg.net.