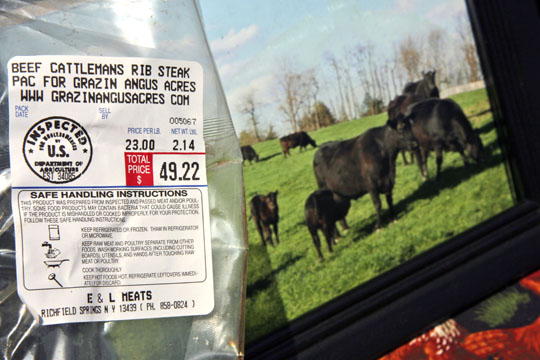 The American beef industry is in trouble. Though the financial strain of rising fuel and food prices is being widely felt across the U.S. economy, the livestock industry, which consumes about 5 billion bushels of corn annually, is suffering more than most.

Feedlot operators, who fatten their animals on corn before sending them to a slaughterhouse, are losing $150 a head with corn prices near record levels because of demand for corn-based ethanol. In Texas, the country’s largest beef-producing state, a quarter of the once-packed feedlot space is unoccupied. Some operations are shutting their doors, and “liquidation”-the culling of herds-has become a frequent escape hatch for the seriously struggling.

But the distress is being felt nationwide. A drought in the West has made once-prime grazing land for cattle unusable. At least four major feedlots have closed in California. And up and down the Central Plains, ranchers and feedlot operators are voicing alarm. “We’re hemorrhaging,” says Daniel Bluntzer, a livestock analyst for Frontier Risk Management. “Whether it’s beef, pork, turkey, or chicken, we’re hemorrhaging right now. The economics have just turned completely upside down because of corn prices.”

For consumers, this means that beef prices will very likely rise by the end of the year, as supplies fall and international demand continues to grow. This combination-less beef, more demand-is unusual. In normal times, when demand goes up, farmers respond by increasing their supplies and bringing more meat to the market.

But this year, in a sense, the normal cadence of supply and demand economics has been disturbed. The cost of maintaining or expanding herds is too formidable. Feed prices are up nearly 50 percent, while fuel prices, in some cases, have doubled.

Related articles:
– If the price of oil doubles, food prices will at least double
– Turkey: Drought Cuts Food Production in Half
– Australia is suffering one of its worst droughts on record
– Worsening Drought Threatens Australia’s “Food Bowl”
– Drought devastates Iraq’s wheat crops
– Floods may boost world food prices for years
– Floods wipe out US crops
– The Best Farmland in the U.S. Is Flooded; Most Americans Are Too Stupid to Panic
– The Price Of Food: 2007 – 2008
– The U.S. Has No Remaining Grain Reserves
– Nine meals from anarchy – how Britain is facing a very real food crisis
– Time to Stockpile Food?
– Food Riots are Coming to the U.S.
– UN alert: One-fourth of world’s wheat at risk from new fungus
– THE FOUR HORSEMEN APPROACH – FAMINE IS IN THE AIR
– Philippines: Food Shortage Looms – Arroyo Adviser

At the same time, the rising prices are unlikely to drive down overall demand. Indeed, not only do consumers continue to purchase beef, but they are expected to consume it in record numbers. Over the next 40 years, global meat demand is projected to double, largely because of demand from developing countries. Even in the United States, where the beef market has become somewhat stagnant, beef consumption today is still double what it was in the middle of the 20th century.

The big question, then, is, Who will supply the world with beef in the coming decades? The United States has long been one of the world’s leading exporters, just behind Brazil and ahead of Argentina. Even import restrictions by Asian countries, adopted in response to the worldwide scare over mad cow disease, have done little to erode the U.S. position.

Analysts watching the fallout in the U.S. beef industry this summer say the current pressures aren’t fatal, but they do expect them to shake up the way the industry does business. The conversion of small, family-owned farms into commercial agribusiness will likely accelerate. Many cattle owners are starting to switch from straight-up corn feed to cheaper alternatives. One option is distillers grains, a byproduct of ethanol production. But because distillers grains are also derived from corn, their price has gone up, too.

With little room to maneuver, the livestock industry is seeking help from the federal government. Like many groups, it blames the government’s support of corn-based ethanol for driving up corn prices.

Texas Gov. Rick Perry, speaking for his state’s livestock interests, has asked the Environmental Protection Agency to relax federal standards on the amount of ethanol blended into gasoline, saying that the move would reduce pressure on corn prices. “While I have no doubt this mandate was a well-intentioned effort to move our country toward energy independence,” he said last month, “it is doing more harm than good, and must be modified before our livestock industry suffers permanent damage.” A decision from the EPA is due later this month.

In recent testimony before Congress, some economists have said that relaxing the mandate will have only a minimal effect on prices. And even if they do decline, prices are not going back to their former levels. The days of $3 a bushel corn are long gone. Livestock owners, somehow, will have to figure out a way to adapt.