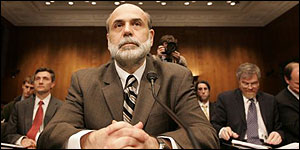 Strategists at Barclays accuse Ben Bernanke of a policy blunder

Barclays Capital has advised clients to batten down the hatches for a worldwide financial storm, warning that the US Federal Reserve has allowed the inflation genie out of the bottle and let its credibility fall “below zero.”

“We’re in a nasty environment,” said Tim Bond, the bank’s chief equity strategist. “There is an inflation shock under way. This is going to be very negative for financial assets. We are going into tortoise mood and are retreating into our shell. Investors will do well if they can preserve their wealth.”

Barclays Capital said in its closely-watched Global Outlook that US headline inflation would hit 5.5pc by August and the Fed will have to raise interest rates six times by the end of next year to prevent a wage-spiral. If it hesitates, the bond markets will take matters into their own hands. “This is the first test for central banks in 30 years and they have fluffed it. They have zero credibility, and the Fed is negative if that’s possible. It has lost all credibility,” said Mr Bond.

The grim verdict on Ben Bernanke’s Fed was underscored by the markets yesterday as the dollar fell against the euro following the bank’s dovish policy statement on Wednesday. Traders said the Fed seemed to be rowing back from rate rises. The effect was to propel oil to $138 a barrel, confirming its role as a sort of “anti-dollar” and as a market reproach to Washington’s easy-money policies.

The Fed’s stimulus is being transmitted to the 45-odd countries linked to the dollar around world. The result is surging commodity prices. Global inflation has jumped from 3.2 to 5pc over the last year. Mr Bond said the emerging world is now on the cusp of a serious crisis. “Inflation is out of control in Asia. Vietnam has already blown up. The policy response is to shoot the messenger, like the developed central banks in the late 1960s and 1970s,” he said.

“They will have to slam on the brakes. There is going to be a deep global recession over the next three years as policy-makers try to get inflation back in the box.”

Barclays Capital recommends outright “short” positions on Asian bonds, warning that yields could jump 200 to 300 basis points. The currencies of trade-deficit states like India should be sold. The US yield curve is likely to “steepen” with a vengeance, causing a bloodbath for bondholders.

David Woo, the bank’s currency chief, said the Fed’s policy of benign neglect toward the dollar had been stymied by oil, which is now eating deep into the country’s standard of living. “The world has changed all of a sudden. The market is going to push the Fed into a tightening stance,” he said.

The bank said the full damage from the global banking crisis would take another year to unfold. Rob McAdie, Barclays’ credit strategist, said: “The core issues have not been addressed. We’re still in a very large deleveraging cycle and we’re seeing losses continue to mount. We think smaller banks will struggle to raise capital. We’re very bearish — in the long-term — on high-yield debt. The default rate will reach 8 to 9pc next year.”

He said investors had taken their eye off the slow-motion disaster engulfing the US bond insurers or “monolines.” Together these firms guarantee $170 billion of structured credit and $1,000 billion of US municipal bonds.

The two leaders — MBIA and Ambac — have already been downgraded as the rating agencies belatedly turn stringent. The risk is further downgrades could set off a fresh wave of bank troubles. “The creditworthiness of many US financial institutions will decline in coming months,” he said.

The bank warned that engineering and auto firms we’re likely to face a crunch as steel and oil costs surge. “Their business models will have to be substantially altered if they are going to survive,” said Mr McAdie.

A small chorus of City bankers dissent from the view that inflation is the chief danger in the US and other rich OECD countries. The teams at Societe Generale, Dresdner Kleinwort, and Banque AIG all warn that deflation may loom as housing markets crumble under record levels of household debt.

He said it would be madness to throw millions out of work by deflating part of the economy to offset a rise in imported fuel and food prices. Real wages are being squeezed by oil, come what may. It may be healthier for society to let it happen gently.